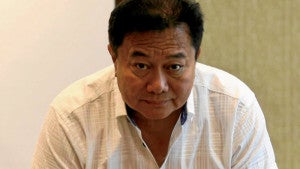 House Speaker Pantaleon Alvarez on Friday urged the protesters on Friday to respect the Supreme Court decision allowing the burial of the former President Ferdinand Marcos at the Libingan ng mga Bayani in Taguig.

Alvarez, a close ally of President Rodrigo Duterte, made the statement as protests erupted in Metro Manila after Marcos’ remains were sneaked into the Libingan ng mga Bayani and buried around noon without waiting for the Supreme Court decision to be final and executory.

“We are a government of laws and not of men,” Alvarez reminded the protesters. “This cardinal principle of a democratic system is the basis of the Supreme Cout ruling allowing the burial of former President Ferdinand Marcos at the Libingan ng mga Bayani. We should respect its decision as the final arbiter of all constitutional and legal issues.”

Duterte had earlier ordered the Armed Forces of the Philippines to prepare for the burial to fulfill his campaign promise of putting the divisive issue to rest.

Alvarez said the administration respects the protesters’ right to freedom of speech, expression and peaceful assembly.

“The Duterte administration is well aware that some sectors are vehemently opposed to the Marcos burial at the Libingan,” he said. “They can express their grievances as part of freedom of speech and of expression and they can freely exercise their right to peacefully assemble to articulate their sentiments.”

“This is part and parcel of our democratic tradition and the government will uphold these fundamental freedoms and right enshrined in our Constitution,” he added.

Read Next
Trump’s election triggers flood of immigration questions
EDITORS' PICK
UK’s Boris Johnson will resign, BBC reports
Unemployment rate up to 6% in May
Geek out at TOYCON 2022 powered by Smart Signature
High inflation: Your P1 is now worth only 87 centavos
High-risk pregnancy: Reducing your risk is in your hands
House energy committee chair Arroyo bats for cheap electricity
MOST READ
Suspect in grisly killing of missing woman in Bulacan arrested
Kim Atienza’s daughter flaunts bikini body in response to critics of her ‘revealing photos’
Number of active COVID-19 cases in PH breaches 11,000
Ex-Defense chief Lorenzana is the new BCDA chair
Don't miss out on the latest news and information.