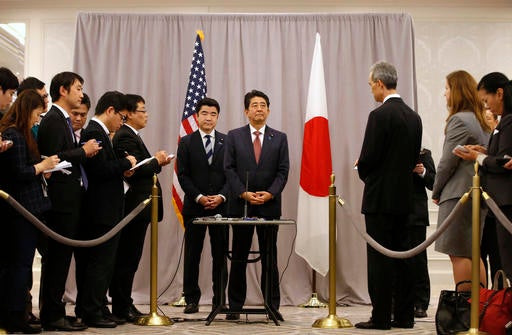 Japanese Prime Minister Shinzo Abe, center, right, listens to questions from members of the press after meeting with President-elect Donald Trump, Thursday, Nov. 17, 2016, in New York. Abe made a stop in New York to meet with the president-elect while en route to an APEC meeting in Lima. AP Photo

NEW YORK—Japan’s prime minister voiced confidence Thursday about Donald Trump as he became the first foreign leader to meet the US president-elect, who was narrowing in on cabinet choices.

Trump, who has been receiving a flurry of Republican operatives at his Manhattan skyscraper since his shock victory last week, appeared to be selecting staunch backers but also considering former rivals for top jobs.

Japanese Prime Minister Shinzo Abe met for 90 minutes with the billionaire at Trump Tower to sound him out after a campaign that alarmed many US allies.

“As an outcome of today’s discussions, I am convinced Mr. Trump is a leader in whom I can have great confidence,” Abe told reporters, describing a “very warm atmosphere.”

But Abe, a nationalist who has struggled both to perk up Japan’s economy and face the rise of China, declined to go into specifics.

Japan is one of Washington’s closest allies but Trump alarmed Tokyo policymakers during the campaign by musing about pulling the thousands of US troops from the region and suggesting that officially pacifist Japan may need nuclear weapons.

Trump also vowed during the election to tear up the Trans-Pacific Partnership, a proposed vast trade pact backed by outgoing President Barack Obama and which Abe had made a top priority.

Obama, who has refrained from overt criticism of his successor since the election, was wrapping his final visit to Europe in Berlin — where some commentators saw him as passing the torch as the world’s champion of liberal democracy to German Chancellor Angela Merkel.

Trump also met Thursday with Senator Jeff Sessions of Alabama and hinted that he would offer a prime position to the Republican, one of the earliest supporters of Trump’s once longshot campaign who shares the 70-year-old billionaire’s antipathy to immigration.

The tycoon in a statement said he was “unbelievably impressed” with Sessions but had not yet made decisions on his cabinet.

MSNBC reported that Trump may also be considering one of his harshest Republican critics, Mitt Romney, as secretary of state. Trump was apparently set to meet with the former Massachusetts governor over the weekend.

“I think Mr. Romney would be quite capable of doing a number of things,” Sessions told reporters after his talks with Trump.

Romney, who lost to Obama in 2012, had described Trump as vulgar, dishonest and out of line with US values, rebuking the tycoon for proposals such as banning all foreign Muslims from the United States.

Romney would bring a more orthodox Republican worldview to foreign policy. In 2012 Romney described Russia as the top geopolitical threat — a striking contrast to Trump who has exchanged compliments with President Vladimir Putin.

Earlier reports said Trump may give the job of top diplomat to South Carolina Governor Nikki Haley, an Indian American woman who would inject rare diversity into his team. Haley headed into Trump Tower on Thursday but did not speak to reporters.

Another name floated for the State Department has been former New York mayor Rudy Giuliani, a combative longtime backer of Trump, who would likely face tough Senate scrutiny over his business dealings.

Officials at the State Department and the Pentagon said Thursday that Trump’s team had reached out on the transition, easing concerns of critics who note Trump’s lack of governing experience.

“Israel has no doubt that President-elect Trump is a true friend of Israel,” Dermer said.

Trump pulled off the biggest upset in modern US political history through support from white working-class voters, defeating Hillary Clinton in a number of states that had given Obama comfortable victories including Ohio, Pennsylvania and Wisconsin.

George Gigicos, the campaign’s advance team director, told reporters that Trump would head to some such states after next week’s Thanksgiving holiday in his first post-election trip outside the New York area and Washington.

“We’re working on a victory tour now. It will happen in the next couple of weeks,” he told reporters.

The location would offer more seclusion and comes amid complaints by New Yorkers about the congestion in front of Trump Tower on bustling Fifth Avenue.

But top House Democrat Nancy Pelosi, meeting in Washington with Vice President-elect Mike Pence, said her party stood ready to work with Trump on areas of potential agreement such as improving child care access — an issue the tycoon embraced during the campaign.

Pelosi, 76, a liberal from San Francisco who as House speaker was the highest-ranking woman in US history, has led House Democrats since 2002 with strong internal support.

But 43-year-old Congressman Tim Ryan from industrial Ohio on Thursday announced he would challenge Pelosi, saying the election showed that Democrats need to change.

“Keeping our leadership team completely unchanged will simply lead to more disappointment in future elections,” Ryan said in a statement.