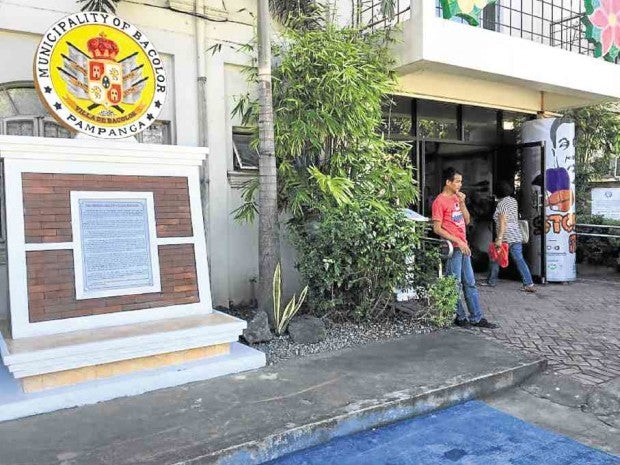 BACOLOR, PAMPANGA — Identity and heritage matter much for this former Philippine capital.

On this town’s 440th founding anniversary and 25 years after the 1991 Mt. Pinatubo’s eruptions and lahar almost obliterated it, officials here passed laws reverting to the name and seal given by King Carlos III of Spain in 1765.

Its official seal is again the Spanish royal coat-of-arms, set in yellow this time. Built and displayed at the facade of the town hall, the seal announces the motto, “Pluribus Unum, Non Plus Ultra” (Out of Many, No Further and Beyond) to indicate that Bacolor was among Spain’s most favored towns. It is one of five Philippine places that was given the title “villa” (city).

“The adoption of the seal affirms the rich historical and cultural significance of Bacolor to the province of Pampanga and to the Philippines, and heralds the indomitable spirit of the good people of Bacolor, ever resilient in the midst of war, calamities and other adversities,” said Nestor Galura, executive director of the Center of Capampangan Arts and Culture of the Don Honorio Ventura Technological State University.

The original seal was among those buried by lahar on Oct. 1, 1995, Galura said.

The town now has an official hymn that, according to Mayor Jose Maria Hizon, “conveyed the town’s arts, culture and historical role and significance.”

Written and composed by former Catholic priest Cris Cadiang, the hymn’s CD and musical sheets have been distributed to principals and heads of public and private schools to popularize it.

The lyrics took time to be finalized as stakeholders disagreed over a line stating that the town was allowed to be buried by lahar to be able to save nearby towns. That line was replaced, celebrating instead the capacity of the town to rise in good or bad times.

“We want the young and future generations of Bacolorenos to know our glorious past and take pride in it,” Hizon said.

That is a big task. Around 25,000 residents have returned to the town while some 100,000 others continue to live in eight resettlement sites in Bulaon in the City of San Fernando, Madapdap in Mabalacat City, Sta. Lucia in Magalang town, Pandacaqui in Mexico town, Buensuceso and Arenas in Arayat town, Wenceslao in Lubao town, and Apalit in Floridablanca town.

Because of its long literary tradition, Bacolor developed into a sort of ‘Athens of Pampanga.’ The town became the ‘cradle of the Capampangan language,’ said historian Francis Musni.

“It is the home of pioneering writers in the language like Fr. Anselmo Jorge, playwright of the longest play in Philippine theater history. The first ever zarzuela in the vernacular, ‘Ing Managpe’ was written by Mariano Proceso Pabalan. The dean of Capampa’gan writers and revolutionary Juan Crisostomo ‘Crissot’ Soto is also from this town, as many other writers and journalists such as Felix Galura, Modesto Joaquin and Pascual Gozun,” Musni said.

The town produced public officials like Tiburcio Hilario, first governor of Pampanga, and jurists and lawyers such as former Justices Roberto Regala and Eduardo Gutierrez David, and former Justice Minister and Solicitor General Estelito Mendoza. Francisco Liongson, a general in the Philippine Revolution, became a senator.

Bacolor became the capital of the Philippines at the declaration of Spanish Governor-General Simon de Anda during the British occupation from 1762 to 1764.

It ceased being the capital of Pampanga in 1904 when the national railway passed through San Fernando. —TONETTE OREJAS