Pakistan displays military might in drill near India border 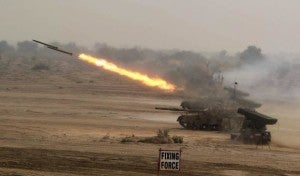 Pakistan army tanks take part in a military exercise in Khairpur Tamiwali, Pakistan Wednesday, Nov. 16, 2016. Sharif and army chief traveled Wednesday to a strategic area along the border with India to observe a drill meant to display the country’s military might amid escalating tensions with New Delhi over the disputed Kashmir region. —ASIM TANVEER/AP

KHAIRPUR TAMIWALI, Pakistan — Pakistan put its military might on display Wednesday with the country’s prime minister and the army chief traveling to a strategic area close to the border with archrival India to observe a military drill.

The exercise, which showed off both ground forces and Pakistan’s air power, comes amid escalating tensions between Islamabad and New Delhi over the disputed Kashmir region.

Both nuclear-armed nations claim the Himalayan region in its entirety.

The timing of the drill, which took place in the Khairpur Tamiwali desert area near the district or Bahawalpur, was particularly stark — just three days after Indian fire in Kashmir killed seven Pakistani soldiers in a new escalation between the two rival nations. The area lies 75 kilometers (45 miles) southeast of India.

Speaking to the troops, the prime minister paid a glowing tribute to the army chief and the country’s military and reiterated his government’s commitment to fighting terrorism.

He also issued a warning to India.

“The situation at the border remains sensitive due to India’s grave violations of the cease-fire agreement,” he said. “We cannot remain detached from recent developments in our region. Efforts by any country that harms Pakistan’s security and territorial integrity will be met with a befitting response.”

He said Islamabad is committed to following a policy of non-interference in other countries’ internal affairs and expects the same from others.

The latest Pakistan-India escalation was set off by a deadly September attack on an Indian military base in the India-controlled part of Kashmir. India has blamed Pakistan-based militants for that attack and others, charges that Pakistan denies.

The two sides have traded fire repeatedly in recent weeks across the Line of Control, which divides the Himalayan region into two sections, an India- and a Pakistani-controlled Kashmir.

Tensions have run high since Indian troops killed a Kashmiri militant leader in July. The killing ignited some of the most violent protests in years, and dozens of people have been killed in India’s resulting crackdown.

India in recent weeks claimed it carried out “surgical strikes” against militants in the Pakistan-controlled Kashmir. Pakistan dismissed the claim and called on India to produce evidence to back it up.

The Indian fire over the weekend that killed seven Pakistani soldiers was a shock in this country, where many consider the military all-powerful. But the army chief, speaking to the troops after Wednesday’s drill, said that he does not believe in hiding troop casualties.

“We disclose when our soldiers are martyred,” Raheel Sharif said, then added that Pakistan knows for a fact that India lost 40 soldiers in skirmishes in recent month — something New Delhi has not confirmed. The prime minister and the army chief, who share the same last name, are not related.

Pakistan’s powerful and hugely popular army chief has less than two weeks before retirement after serving a three-year term. The government has not yet named his successor.

He will be leaving a legacy of a military chief who supported a strong, democratically elected government, personally served on the front lines and who led a military offensive that claims to have dismantled many militant sanctuaries in tribal regions bordering Afghanistan.