Robin Padilla: I already paid for my sins in jail 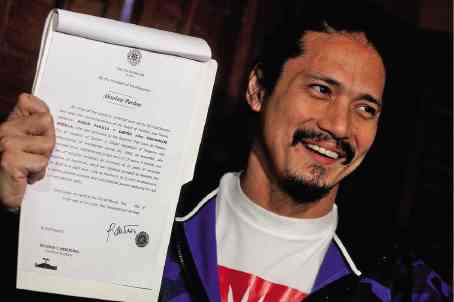 Actor Robin Padilla said on Wednesday that the absolute pardon given to him by President Rodrigo Duterte was not a political favor.

“I cannot accept that because I have campaigned for several presidents and I have never asked to be pardoned,” he told reporters. “And if that were the case, then I should have been given [full] pardon already by former President Fidel V. Ramos.”

The pardon restores Padilla’s civil and political rights, meaning he can freely travel abroad, cast his vote and run for political office, among others.

“Symbolically, the Philippine republic says that I am a decent man, and I am given a second chance even as an ex-convict,” he said.

He called the President’s decision his “rebirth,” adding to his joy over the birth of his first child with wife, TV host Mariel Rodriguez.

A dual citizen, Rodriguez gave birth to daughter Maria Isabella in the United States, without Padilla by her side.

According to the actor, “When I saw the President’s signature, all I wanted to do was immediately run to the US Embassy.”

A vocal supporter of Mr. Duterte, Padilla campaigned for him when Mr. Duterte ran for President. However, he pointed out that he had also done favors for past presidents although he never asked for an absolute pardon.

Padilla also noted that he never hurt or killed anybody. “I already paid for my sins at New Bilibid Prison,” he said.

His lawyer, Rudolf Philip Jurado, said he filed the petition for absolute pardon in the Board of Pardons and Parole in August without the actor’s knowledge.

The petition was approved and endorsed to Malacañang by the Department of Justice. When Padilla went to the Palace to talk to the President about his elder sister Rema’s work in public hospitals, he was handed his papers.

In 1994, Padilla was convicted for illegal possession of firearms and sentenced to a maximum of eight years in jail. He was released after four years after he was given a conditional pardon by Ramos.

Read Next
Did you know: Suez Canal
EDITORS' PICK
Legarda emphasizes role of ICC/IPs in nation building this IP month
Work-From-Home is here to stay and requires reliable logistics
Hong Kong to further tighten COVID-19 travel restrictions
USAID Opportunity 2.0 calls for applicants for grants for out-of-school youth engagement
Only 4,393 new COVID cases logged due to low number of tests
DOTr to defend proposal to increase passenger capacity in public transport
MOST READ
Martires asks why he is being singled out over issues on releasing SALNs
AC Bonifacio’s dance cover of Lisa’s ‘Money’ leaves original choreographer ‘mind blown’
Isko to critics after remarks vs Robredo: I’m sorry, this isn’t about Mr. Congeniality
Bongbong says PH should modernize infrastructure to become Asia’s next logistics hub
Don't miss out on the latest news and information.