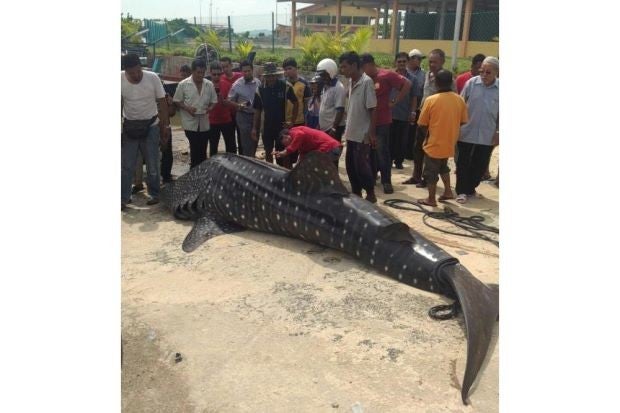 Whale shark dragged ashore in Malacca before being released to sea. PHOTO BY THE STAR/ASIA NEWS NETWORK

MALACCA – Fishermen have released a whale shark that was caught in a fishing net near the Sungai Duyong jetty here.

The shark, weighing approximately 1.5 tons, was kept in the water near the shore for about 12 hours.

It was then dragged ashore to the jetty site before fishermen – with the aid of the state Fisheries Department – released it back into the sea.

Fisherman Ibrahim Mahat, 55, said the whale shark was entangled in his net while he was fishing off the coast here.

“My brother and I suspected something amiss when our boat struggled to drag the catch in, only to find we had caught a whale shark,” he said on Wednesday.

He said the shark was dragged onto shore near the jetty at about 2:30 p.m.

Local residents rushed to get a picture with the marine creature when the news of a giant fish at the jetty spread on social media.

Alias Ibrahim, 44, said he rushed to the jetty after hearing about it.

“It was a nice experience to see such a giant fish,” he said.

Whale sharks are listed as an endangered species under the Convention on International Trade in Endangered Species of Wild Fauna and Flora (CITES).

Read Next
Congress warned on dangers of con-ass, federalism
EDITORS' PICK
Smart three-peats as country’s fastest mobile network – Ookla
Would the military allow me to stay this long if I’m inutile? – Duterte
In good spirits: SMDC helps farmers and residents through Kadiwa Market
Pre-order the new vivo Y20s [G] to get a free TWS earphone
65% of Filipinos say Duterte’s health should be made public – SWS
DSWD chief admits ‘slow start’ in distribution of aid in ‘NCR Plus’
MOST READ
Vico Sotto frets getting photos of ‘butt vaccination’ from Pasig dwellers
Metro Manila to have shortened curfew hours from 8 p.m. to 5 a.m. under MECQ
San Miguel Corp. continues to invest heavily in the Philippines’ future
COVID-hit Roque slams ‘un-Christian’ query on how fast he secured hospital bed
Don't miss out on the latest news and information.