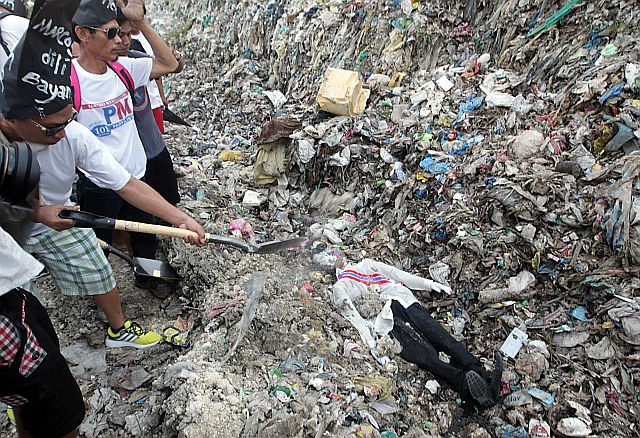 Cebu City activists bury the effigy of Ferdinand Marcos in a dumpsite, on Nov. 15, 2016, to protest the decision of President Rodrigo Duterte to order the burial of the dictator at the Libingan ng mga Bayani, and the ruling of the Supreme Court upholding Duterte’s order. Among those who joined the protest action were Cebu City Mayor Tomas Osmeña and retired judge Mienrado Paredes who was imprisoned during Martial Law. (CDN/ TONEE DESPOJO)

CEBU CITY — She was in her 30s when then Dictator Ferdinand Marcos declared Martial Law in the Philippines on Sept. 21, 1972.

At that time, Evelia Padilla was in Pasay City where she worked in a dressmaking shop while her husband and two children were in Barangay Duljo Fatima, Cebu City.

“People’s rights were violated. Many were killed while some remain missing,” she said.

She joined the anti-Marcos rallies including those at EDSA in February 1986, which drew some 2 million Filipinos and led to the collapse of the Marcos regime.

After more than four decades, Padilla, now 79, was back in the streets – this time protesting against the plan to bury the dictator at the Libingan ng mga Bayani.

She joined the more than 500 others who converged under the flyover of Barangay Mambaling in Cebu City past 3 p.m. and walked for 7.4 kilometers to a dumpsite in Barangay Inayawan.

They brought the effigy of Marcos – a replica of the Dictator’s remains placed inside a glass coffin at a mausoleum in his hometown in Batac, Ilocos Norte.

The group arrived at Inayawan dumpsite past 5 p.m.

The protesters then climbed the mountain of trash and buried the effigy using eight shovels.

Some also carried placards that read “Marcos is not a hero.”

Teody Navea, secretary general of Sanlakas, said the eight shovels symbolized the sectors that were affected by the dictatorship.

Navea stressed that the dictator didn’t deserve to be buried in the Libingan ng mga Bayani but in a dumpsite after putting the country in a 20-year iron-fist rule.

The dumpsite also symbolized their sentiments on the decision of the nine justices of the Supreme Court who ruled in favor of Marcos’ burial in the Libingan ng mga Bayani.

Navea pointed out that the decision served to be thrown in the dumpsite because the nine justices mocked the sufferings of the Martial Law victims.

Among those who joined the “funeral” were Mayor Tomas Osmeña of Cebu City, former commissioner of the Presidential Commission on Good Government Ruben Carranza and former city administrator Francisco “Bimbo” Fernandez.

Osmeña is the son of former senator Sergio Osmeña Jr. whom Marcos defeated in the 1969 presidential elections. The elder Osmeña fled to the United States when Martial Law was declared on Sept. 21, 1972 while son, Sergio III, was imprisoned.

Also in the protest action was retired judge Mienrado Paredes who was among those jailed when Martial Law was declared.

“What I cannot forget the day Martial Law was declared was that I was picked up at 7 a.m.,” he said.

“I was reviewing for the Bar examinations. I did not expect that I would be put behind bars. There was no arrest warrant, no search warrant.”

Paredes said he was brought to Camp Sergio Osmeña without any charges and no one could give him a reason other than his name was on “the list.”

Paredes said that he was imprisoned for a year while his brother was tortured.

With the pending Marcos burial at Libingan ng mga Bayani, Paredes said said the nine justices and President Rodrigo Duterte were on the “wrong side of history.”

“We will repeat that – they are on the wrong side of history,” he said. “Ang tinuod nga bayani ang mga tawo… So basura siya (Marcos) sa kasaysayan. Dili siya bayani. (The real heroes are the people. Marcos was the garbage in history. He is not a hero).”  SFM