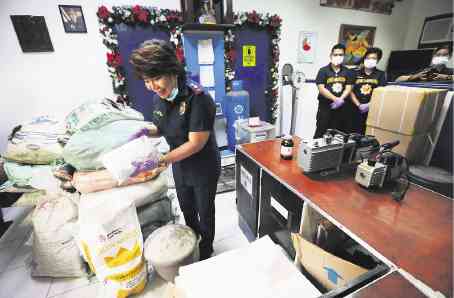 CITY OF SAN FERNANDO—Police are looking for four Chinese nationals classified as “persons of interest” after a suspected laboratory and warehouse of shabu (methamphetamine hydrochloride) was discovered in Apalit town in Pampanga province on Saturday.

The laboratory was discovered at the Gans’ house in Sitio Sto. Niño in Barangay San Juan in Apalit when Enrique Calaguas, a sheriff of Regional Trial Court Branch 79 in the City of Malolos in Bulacan province, served a court document.

The Gans were embroiled in a civil lawsuit with Feedmix Specialist II Inc.

Apalit is at the northern border of Bulacan, which is an hour’s drive from Metro Manila. San Juan is near the town’s center, along the banks of the Pampanga River.

Calaguas served the Gans a writ of execution, Nucom said. The Gans have been operating fishponds in Apalit since 2001 and have unpaid obligations to Feedmix which led to the court case. The Gans, the mayor said, had moved to Romblon province.

Police reported finding chemicals and equipment used in the manufacture of shabu. An inventory released by the police included a sack of sodium hydroxide (caustic soda flake), five gallons of hydrogen peroxide, three electric motor units, three boxes of phosporus red, 11 sacks of sodium hydroxide and a white sack containing 10 packs of white powder labeled as KBH4, which could refer to potassium borohydride.

No information was given as to how many kilograms of shabu were produced in the laboratory or if it served as a satellite laboratory of a larger facility.

Weeks before the discovery, chemicals used in making shabu were found dumped in at least six areas along the sections of Subic-Clark-Tarlac Expressway in the provinces of Tarlac and Pampanga.

While the chemicals and equipment appeared to be intact, there were signs that the contents of cabinets in the bedrooms were looted, Nucom said.

“We were all caught by surprise. We didn’t know there was a shabu lab in our town or these items were kept here,” he said.

He said the incident made him cautious, requesting fire and sanitary personnel to inspect the compounds of two new Chinese investors in the town.

This was the fifth shabu laboratory to be uncovered in Pampanga this year. A facility, capable of producing 400 kg of shabu daily, was discovered at the foothills of Mt. Arayat on Sept. 22.

Another laboratory was discovered in a warehouse inside a 4-hectare piggery in nearby Magalang town on Sept. 7.

In May, a shabu laboratory maintained by Taiwanese nationals was busted in Angeles City. Another laboratory was found in Timog Subdivision, also in Angeles, in March.

In 2014, a warehouse in Greenville subdivision in the City of San Fernando, the provincial capital, yielded P4 billion worth of shabu. Months later, a warehouse of a farmers’ cooperative that kept shabu was dismantled in Tarlac.