Duterte approves purchase of 27,000 assault rifles from US 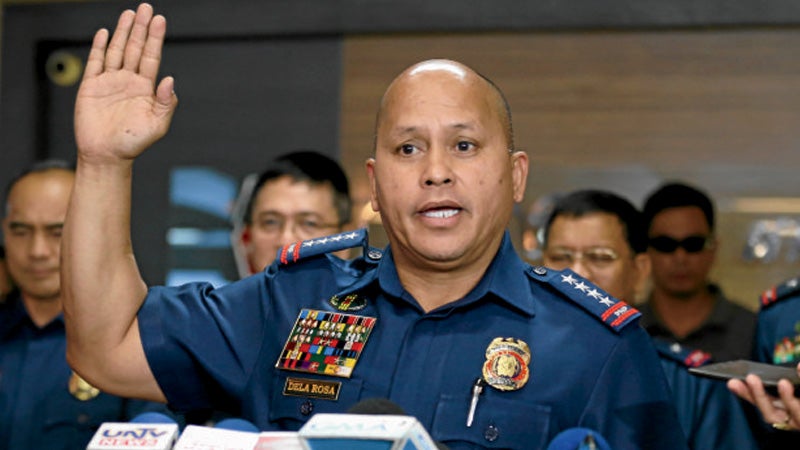 DEAL IS ON PNP Director General Ronald dela Rosa says President Duterte told him to proceed with the M4 deal with the United States. —RAFFY LERMA

The Philippine National Police will push through with the purchase of more than 27,000 assault rifles from the United States, following an about-face by President Duterte, who last week said the deal would be scrapped.

PNP Director General Ronald dela Rosa said on Monday that Mr. Duterte had given the green light for the purchase of 27,394 SIG Sauer M4 assault rifles worth P1.7 billion.

“As far as the PNP is concerned, we have the blessing of the President to continue with the transaction [unless halted],” Dela Rosa told reporters at PNP headquarters in Camp Crame, Quezon City.

Last week, Mr. Duterte expressed anger at “fools” and “monkeys” in Washington seeking to block the deal and said he would cancel it himself.

“[The President] told me to continue the deal,” the PNP chief said. “The processing of documents is going on smoothly … we have the blessing of the President.”

Dela Rosa did not say why the President had changed his mind, but he said there would be a new president in Washington and “he and Donald Trump are friends.”

Mr. Duterte has regularly berated the Obama administration over criticism of his bloody campaign against illegal drugs, but has expressed a desire to work with Trump.

Dela Rosa said he briefed Mr. Duterte about the processing of documents for the deal during the President’s visit to Malaysia last week.

He said it was possible Mr. Duterte would scrap the gun deal if there were an intervention in Washington.

“If they will block it, I’m sure the President will again tell me to stop it. We’re paying for it, we’re not begging for it,” he said.

Reuters reported last month that the US state department halted the planned sale of more than 27,000 M4s to the PNP after Democratic Sen. Ben Cardin said he would oppose the transaction.

The state department informs the US Congress when international weapons sales is in the works.

Aides said Senate foreign relations committee staff informed the state department that Cardin, the most senior Democrat on the committee, would oppose the deal with the Philippines during the department’s prenotification process for the sale of M4s, stopping the deal.

Aides said Cardin was reluctant for the United States to provide weapons to the Philippines given concerns about human rights violations in the country.

More than 3,700 people have been killed in police operations or by suspected vigilantes since Mr. Duterte took office and launched a brutal war on drugs on June 30.

US criticism of Mr. Duterte’s violent campaign against drugs has angered the brash Philippine leader, who almost daily spews profanity-laced tirades against the United States, complicating relations between Washington and Manila.

Mr. Duterte belittled the US state department’s halting of the M4 deal, saying the PNP could buy firearms from
China or Russia.

He said China and Russia had promised him they would sell weapons to the Philippines.

But it wasn’t as easy as solving a supply problem.

The M4 that the PNP needs is a carbine, lighter and shorter than the M16A2 assault rifle. It fires the popular 5.56 millimeter bullet and is capable of firing semiautomatic like a pistol or three-round bursts—ideal for close-quarter combat for which police are trained.

Apparently, China and Russia have nothing like the M4 to offer to the PNP.

Dela Rosa said earlier that the export license for the M4 sale to the PNP was undergoing normal processing as of Nov. 1.

He said the rifles were expected to be delivered to the PNP by April 2017.

The PNP has an approved budget of P2 billion for the acquisition of assault rifles, but the contract price for the M4s is only P1.7 billion, with each basic rifle costing P64,000.