Some supermoons more super than others

Despite some clouds, the skies cleared on Monday evening and allowed many Filipinos in Metro Manila and nearby provinces to witness the biggest and brightest supermoon in 68 years.

The spectacular celestial show was also visible in the cities of Baguio, Tacloban and Davao—but not in the cities of Cebu and Iloilo where heavy clouds frustrated skygazers, according to the Philippine Atmospheric, Geophysical and Astronomical Services Administration (Pagasa).

Astronomer Mario Raymundo was at the ready to explain the rare phenomenon to astronomy enthusiasts gathered at the Pagasa Observatory in Quezon City.

“The best time to take pictures is at 9:52 p.m., because the full moon is at its brightest,” he told the crowd.

According to Raymundo, Monday’s supermoon is “one of the closest and biggest in 68 years and won’t happen again until 2034.”

Another supermoon is coming up on Dec. 13, but it will not be as big and bright as Monday’s.

“Some supermoons are more super than others,” explained Pascal Descamps of the Paris Observatory.

Elsewhere in Asia, skygazers headed to high-rise buildings, ancient forts and beaches on Monday, hoping for dramatic photos of the supermoon.

The phenomenon happens when the Moon is full at the same time as, or very near, perigee—its closest point to Earth on an elliptical, monthly orbit.

From India to Australia, skygazers and photographers sought the best viewing spots in the region where the phenomenon will be visible first, hoping that cloudy skies and the perennial pollution that blights many Asian cities will not spoil the fun.

Thousands of people headed to Sydney’s Bronte Beach to witness the event after author Gavin McCormack created a Facebook page to let friends know of his plans.

“Bring a flask of tea … bring a picnic, bring the kids and bring your binoculars because this is going to be fantastic,” he wrote.

New Delhi residents were hoping toxic smog shrouding the world’s most polluted capital in recent weeks would abate to allow spectacular views as the supermoon rises over the Red Fort, the former Mughal emperor’s residence. 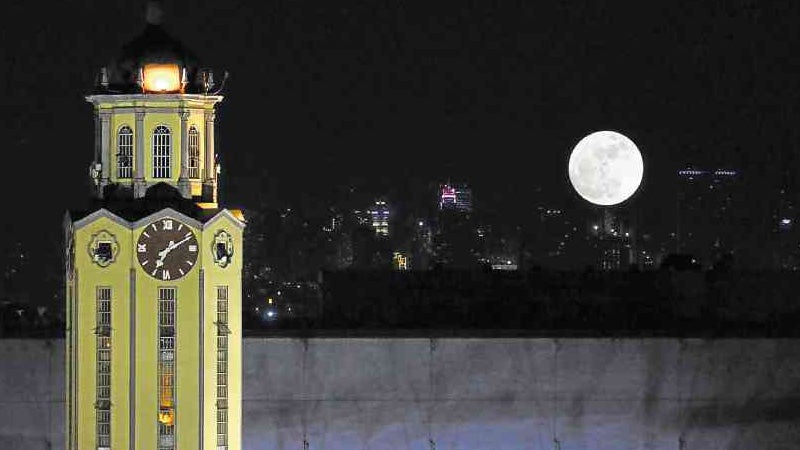 Picnics were organized in downtown Hong Kong for residents to watch the supermoon rise over the financial hub’s famous skyline, while hikers headed to the greener, more distant corners of the Chinese city to enjoy views with less light pollution.

The landmark Taipei 101 skyscraper in Taiwan, one of the world’s tallest buildings, opened its doors to skygazers, with astronomers predicting it would be one of the biggest moons seen from the island in nearly a hundred years.

Special viewing events were organized by astronomy groups, with members of one in Indonesia’s Yogyakarta—the heart of an ancient sultanate —taking to the rooftop of their club headquarters to get a glimpse of the supermoon as it rose over the city’s historic buildings.

The supermoon also meant stronger high tide, something that gets surfers giddy with excitement, not only at the prospect of riding bigger waves at night.

Tides were predicted to be higher than usual on the popular Indonesian holiday island of Bali, a favorite with surfers.

In Thailand, astrologers were predicting the supermoon would bring disaster or great fortune.

Soraja Nuan-yoo, renowned for predicting the 2004 tsunami that killed many in Thailand and other countries round the Indian Ocean, warned that when the Moon got close to the Earth, “natural disasters would happen.”

Astronomers say it can be hard to notice that the Moon appears brighter than usual. Once it is high in the sky, it would be hard to tell the Moon is larger but on the horizon, it could appear quite spectacular. —REPORTS FROM DONA PAZZIBUGGAN AND AFP