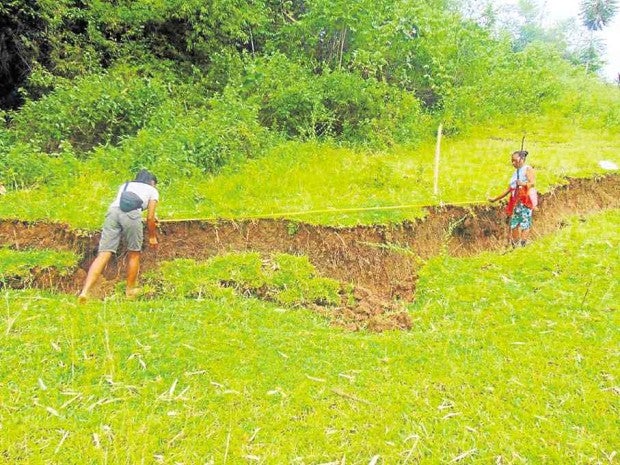 Cracks in the ground have damaged farm lands in the village of Aglinab in Tapaz town, Capiz province. CONTRIBUTED PHOTO

ILOILO CITY—For more than two weeks, Teresita “Angging” Gayas, has been living in a makeshift house in a private lot in a hinterland village in Capiz province. Her house is just a kilometer away but she, along with nine family members, fears returning home because of a possible landslide.

Gayas’ family is among 64 families, composed of 300 villagers, who left Sitio Laugan in the village of Aglinab in Tapaz town in Capiz when soil fissures, some as wide as 2.43 meters (8 feet) and as deep as 1.21 meters (4 feet), started appearing in the village, damaging houses and farmlands.

Tapaz Mayor Roberto Palomar ordered the evacuation of residents after the Mines and Geosciences Bureau (MGB) declared the area unsafe.

Leo Van Juguan, MGB Western Visayas director, said the area should be permanently cleared of people because of the high risk of landslides. He said the area used to be classified as “moderately” susceptible to landslides but now, they needed to upgrade its classification to “high” and “very high” susceptibility.

Gayas said the ground fissures, which affected some 10 hectares of land in the village, appeared after two earthquakes and nearly two weeks of rains. Several houses in the village have started to lean and are in danger of collapsing. She said the displaced villagers are now living in “kurob,” or makeshift houses usually used during typhoons.

“We do not know where to go,” Gayas said. “We just appealed to the owner of the land to let us stay temporarily. But we need a permanent relocation,” she told the Inquirer.

Most of the evacuees are Tumandok, Panay’s largest indigenous group living mostly along the Jalaur and Pan-ay Rivers, the island’s major tributaries.

Gayas, a day care worker and council member of the Tumandok, said the evacuees have yet to get the P5,000 financial aid that the Tapaz town promised. “The amount is not enough to rebuild or transfer our houses,” she said.

But Palomar said they are still working for its release. The town is also negotiating with a landowner for a donation of some 2.5 to 3 ha of land intended for relocation. He said the site will accommodate 50 families while others can stay with their relatives.

“We have no allocation for the procurement of land. Lots in the area are also classified as agricultural,” Palomar said.

Aside from the loss of their houses, villagers said they also fear losing their farms.

They left their farm animals when they evacuated but they keep returning to their village to feed these. “Where will we farm if we cannot work there anymore?” Gayas asked.