Duterte: Sometimes, rule of law can be stupid proposition 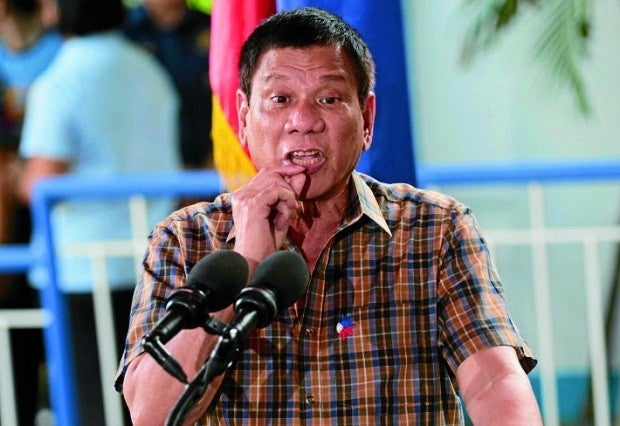 For President Rodrigo Duterte, ensuring the safety of Filipinos in a country “rocked with rebellion and extremism” and “flooded with drugs” can be “hell” and nightmarish.

“You know countries like the Philippines, you do what is right, it is wrong. You do what is wrong, it’s still wrong,” Duterte said in his speech during the 80th founding anniversary of the National Bureau of Investigation in Manila.

“And that’s how I balance governance. Whether to do wrong or to do right, to commit a wrong or do a wrong thing, to make it right,” he added.

Duterte, who is waging a bloody war on drugs that has made global headlines due to alleged human rights abuses, said the rule of law can sometimes be a “stupid proposition” because of disobedience.

“The rule of law is good, if the rules are followed. Very easy to say rule of law. And it applies not only to the government and to us—it applies to all citizens,” he said.

Recalling his experience as a prosecutor and mayor of Davao City, Duterte said he had to make a choice whether to “innovate” the rule of law or let his people suffer because “shabu was flowing in and out.”

“I would like to follow the rule of law. It is rules which make up the law. But when shabu was coming in, strong and fast, we had to make a choice. We innovate the law, the rule of law, or we let our people suffer. That’s the choice,” Duterte said.

Warning against “evil persons who’d want to make money at the expense of the blood and over the bones of his countrymen,” Duterte maintained that the death toll in the drug war was not entirely carried out by government security forces.

“We have an accurate count of those who defied the law and got killed in the process. But we do not have the truth and the statistics of how many of the 3,000 were killed, were murdered. But when the Human Rights came, they would always say, ‘You know, Duterte, under your administration, you have killed 3,000.’ And I would try to explain that this was not all ours. Remember, I fired six generals when I assumed the presidency for involvement in the drug industry,” he said.

“The order is simply this: Go out. Arrest them if you can but if there is no peaceful method of doing it and you are presented with a violent resistance, thereby placing in jeopardy your life, you shoot the son of a b****. Shoot them dead,” Duterte added.

Citing rebellion and acts of terrorism in Mindanao, the President said he would use a “calibrated response” in dealing with these crimes and not just allow Filipinos to be slaughtered in the name of human rights.

“We have a strong rebellion in Mindanao, terrorists in Jolo conduct abductions almost every day,and  every time they do it they slap us in the face… We have to prepare for it because once terrorists got booted out of Middle East, they will come here,” Duterte said, adding that he had agreed with Malaysia and Indonesia in fighting terrorism.

“I will not just sit down and allow my people to be slaughtered for the sake of human rights,” he said. JE/rga