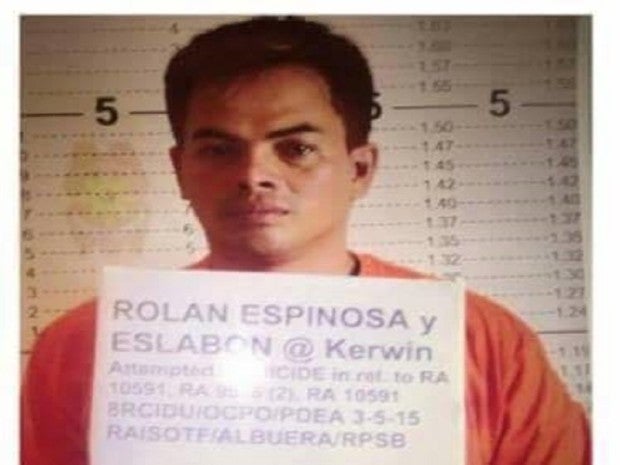 In this Oct. 17, 2016 file photo. alleged Visayas drug lord Rolan ‘Kerwin’ Espinosa Jr. poses for his mugshot after being arrested by the Abu Dhabi police who were tipped off by Filipino workers who spotted him there.  INQUIRER RILE PHOTO

MANILA — Justice Secretary Vitaliano Aguirre on Monday said alleged drug lord Roland “Kerwin” Espinosa Jr. might be detained at the National Bureau of Investigation instead of the police headquarters in Camp Crame “to avoid any cover up.”

“It (Espinosa’s custody) might be given to the NBI considering that the CIDG people are involved (in the killing of Kerwin’s father, Albuera, Leyte Mayor Rolando Espinosa Sr.),” Aguirre told reporters in an ambush interview after the commemoration of the bureau’s 80th founding anniversary on Monday.

CIDG refers to the PNP’s criminal investigation and detection group, whose members in Region 8 killed Espinosa’s father Mayor Rolando Espinosa in a highly questionable shootout inside a provincial jail.

The circumstances that led to the killing sparked a Senate investigation.

Aguirre said President Rodrigo Duterte told him and NBI director Dante Gierran about the “possibility” of placing Kerwin under their custody.

“The President has said that’s possible in order to avoid any cover up since CIDG men were involved in killing the mayor,” he said in mixed Tagalog and English.

Aguirre also wrote Dela Rosa to tell the chief of police that his department would be “ready to assist” the police in terms of Kerwin’s detention.

Dela Rosa has not replied to the letter as of Monday, Aguirre said.

But the justice secretary quickly clarified that nothing was final, as of Monday, when it came to Kerwin’s custody.

He added that the initial security plan for Kerwin would remain, meaning that upon arrival, Kerwin would be taken to Camp Crame first.  SFM/rga