Speaking out for drug war victims, Filipina goes into hiding 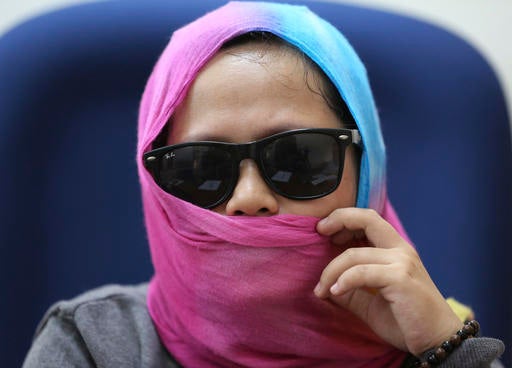 In this Sept. 7 photo, Harra Kazuo, live-in partner of alleged drug pusher Jaypee Bertes, covers her face to protect her identity during an interview at the Commission on Human Rights office in Quezon City, north of Manila, Philippines. Bertes was allegedly shot to death by police with his father-in-law following a drug raid which is part of the continuing anti-drugs campaign of Philippine President Rodrigo Duterte (AP Photo/Aaron Favila)

MANILA, Philippines — When police shot to death Harra Kazuo’s common-law husband and his father following a drug raid in the Philippines, she sought one thing: justice.

In a television interview shortly after their deaths in July, the 26-year-old mother accused two officers of killing them in cold blood. She then recounted the allegations before a Philippine Senate committee investigating the country’s brutal drug war in testimony broadcast nationwide.

What Kazuo has gotten instead, though, is a life lesson in the consequences of speaking out. Today, she lives with her three children in hiding, sheltered by an extraordinary witness protection program run by the country’s independent Commission on Human Rights, which has feared for her safety while it investigates the case.

That such a program exists is powerful indictment of the lack of trust many here have in the country’s notoriously corrupt police, who are spearheading an anti-drug campaign that has left more than 4,000 people dead in just a few months. It also illustrates the failures of a broken justice system few believe can hold anyone to account.

Kazuo said she is pushing the case because “what is happening is not right.”

Although both officers have been suspended and have attended preliminary hearings, city prosecutor Orlando Mariano said they remain free and neither has been indicted. If prosecutors determine the evidence is too weak, both men could be end up being absolved.

Jose Luis Martin “Chito” Gascon, who directs the Manila-based rights commission, said no police have been charged criminally in court since the drug war began despite persistent reports of security forces summarily executing drug suspects. National police spokesman Dionardo Carlo, however, said police have been arrested and charged, but he could offer no details.

Either way, the killing of Kazuo’s family members “is the highest profile case we’ve had so far, and it’s not even in court yet,” Gascon said. “So what do you think’s going to happen to the rest — the ones that got no attention and have already been forgotten?”

President Rodrigo Duterte unleashed his campaign to rid the country of narcotics immediately after taking office June 30. The effort has been praised by a population exasperated by corruption and crime, but it has been condemned by the United Nations, foreign governments and activist groups because of its staggering death toll and apparent disregard for human life.

Kazuo acknowledges that her husband, Jaypee Bertes, was small-time methamphetamine dealer. But she insists he only pushed the drug because he could find no other work.

Just before midnight on July 6, police raided their tiny one-room apartment in a Manila slum. The officers could not find any drugs, but they hauled 28-year-old Bertes away anyway, along with his father, 49-year-old Renato. When Kazuo visited them a police station the next morning, both men were severely bruised. Hours later — after she left — they were shot dead at the end of a narrow corridor, each three times.

Police said the men were killed after one of them attempted to grab a firearm belonging to the officers. But commission officials, who conducted their own forensics investigation, said the detainees had been beaten so badly that they could not have done so. One of Jaypee’s arms, they said, had been broken.

It wasn’t the first time a drug suspect was fatally shot in police detention. Last week, a town mayor detained for illegal drugs and gun possession was killed by officers in a purported gunbattle in his jail cell in central Leyte province. Sen. Panfilo Lacson, a former national police chief, called for an investigation and suspects the mayor, Rolando Espinosa Sr., was killed to prevent him from implicating other officials to illegal drugs.

Gascon said the officers in Kazuo’s case may have killed her husband to cover any links that could connect them to drug crimes. Kazuo said Jaypee had met the two officers she accused at least once before, when he bribed them to get out of a previous drug charge.

The families of most victims in the drug war have stayed silent for good reason. Philippine media reported the story of one man who had doggedly pursued justice for months for his sister, who had been killed by unidentified gunmen in Manila. The man, who was not under the commission’s protection, turned up dead in late October.

The death fits a pattern that has characterized Duterte’s “war:” those who speak out against it, or are perceived as doing so, often face consequences. They include journalists who’ve been attacked with hate mail and death threats by internet trolls, and foreign governments, rights groups and critics Duterte has lambasted personally.

After Sen. Leila de Lima launched congressional probe into reports of extrajudicial killings and called Kazuo to testify in August, Duterte suggested she resign and hang herself.

De Lima was later kicked off the probe by Duterte’s legislative allies, a move Human Rights Watch slammed as “a craven attempt to derail accountability.” Shortly afterward, she told journalists she feared for her own life. “Can I rely on the regular authorities in government? … Can I rely on the (police) for my security?” she asked.

Carlo, the police spokesman, dismissed accusations the drug war was fueling a climate a fear. But he said Kazuo had done the right thing by speaking out, because it helps authorities “go after the policemen involved.”

Kazuo said she is now cut off from friends and family and does not even dare call them for fear her conversations could be tracked. On the few occasions she has met relatives, she’s done so at the offices of the rights commission, which delivers groceries every week so she does not have to go out.

“I rarely go outside anymore,” she said. “I stay inside the house, sometimes I read books, love stories … I don’t even want to go outside and walk.”

Kazuo, who has a 2-year-old daughter and a 6-year-old son, gave birth to a boy in September. During a visit for a pre-natal checkup, someone recognized her, prompting commission officials to switch hospitals.

The commission is now protecting at least seven other witnesses in similar circumstances, several of whom also have children. Its investigators are combing over 250 cases, many involving allegations that police carried out extrajudicial killings or other abuses.

They’ve received little cooperation from police, though, who’ve refused to release records for each death recorded so far. An investigator on Kazuo’s case said police had refused to release their autopsy report, so the commission conducted its own.

“It’ll get worse before it gets better,” Gascon said. “While Duterte is President, I do not believe people will be charged and held to account … so what we need to do now is to prepare the evidence for the time we can have a proper reckoning.”/rga