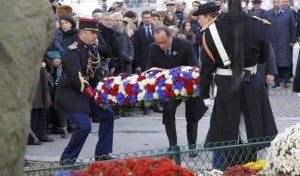 PARIS — French President Francois Hollande and Britain’s Prince Harry paid respects Friday to the fallen of World War I while marking 98 years since the Allies claimed their victory in the bloody conflict.

Hollande attended a solemn and chilly Armistice Day ceremony at the famed Arc de Triomphe in Paris. Harry, who served with the British Armed Forces in Afghanistan, attended a service at the national Armed Forces Memorial in Staffordshire, England.

The Great War — one of the deadliest conflicts of the modern era — claimed the lives of 5 million Allied troops and over 3 million Central Powers soldiers.

Decorated French veterans stood in silence as Hollande laid a large floral wreath at the foot of the Tomb of the Unknown Soldier in remembrance of the millions who gave their lives during the 1914-18 conflict that ended on Nov. 11.

Inspired by prehistoric monuments, the Armed Forces Memorial where Harry led Britain in remembering the dead is aligned so the sun’s rays stream through the door on the 11th hour of the 11th day of the 11th month. The light illuminates a wreath at the heart of the memorial.

As veterans bearing flags looked on, the 32-year-old prince read aloud “The Soldier,” the Rupert Brooke poem that tugs on the twin issues of sacrifice and love of country.

Read Next
‘Storyteller charm’ does trick for actress in Read-Along Festival
EDITORS' PICK
Karding damage to infrastructure at P23M
Bongbong Marcos says PH ‘open for business’ with new Clark Airport terminal
Sierra Madre stands up to Karding, but needs protection vs the humans it saves
Reignite your passion with the vivo Y35
House energy committee chair Arroyo bats for cheap electricity
UNFPA Philippines Career Opportunities
MOST READ
Badoy not with Office of the President, NTF-Elcac, under Marcos admin — solon
Angelica Panganiban ‘duguan, sugatang mom’ one week into breastfeeding
Maja Salvador to star in new ABS-CBN TV series with Richard Gutierrez
Kris Aquino offers help for Lolit Solis’ dialysis needs amid her own illnesses
Don't miss out on the latest news and information.