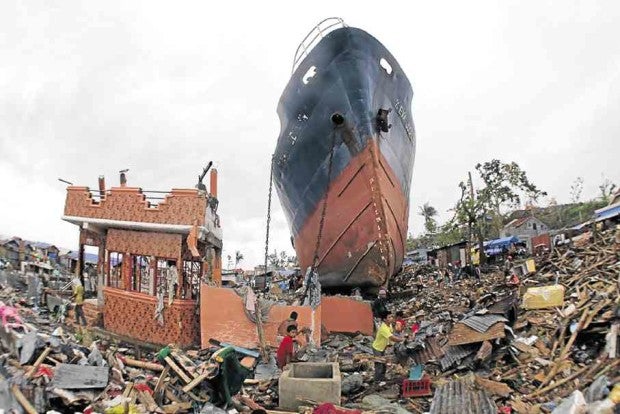 Supertyphoon “Yolanda” roused the nation from stupor and apathy toward climate change. The humanitarian crisis caused by the monster storm turned the Philippines into the poster child for climate change.

Overnight, Filipino officials metamorphosed into champions for climate action, joining world leaders at the 2015 Paris climate change summit in clamoring for an end to carbon emissions.

Sen. Loren Legarda, United Nations Global Champion for Resilience, said that because of Yolanda (international name: Haiyan) and the Philippines’ recurring exposure to devastating storms, the country was in the best position to demand immediate climate action.

This action chiefly requires industrialized nations to agree to drastic cuts in carbon emissions, fund adaptation of vulnerable nations, and embark on a massive development of renewable energy sources.

Emmanuel de Guzman, vice chair of the Climate Change Commission (CCC), could not have overemphasized it when he said the Philippines now had the “moral suasion over other nations in championing disaster risk reduction (DRR) and climate action.”

It is this perceived moral leadership of the Philippines—in coaxing great powers and financial meccas of the world to foot the bill for adaptation and make deep emission cuts themselves—that would be lost should the country fail to ratify the Paris Agreement.

From outright rejection of the climate treaty, President Duterte had a change of heart after a majority of his Cabinet officials voted to uphold the treaty.

On Monday, the eve of Yolanda’s third anniversary, Mr. Duterte said: “After so much debate, I will sign the climate change agreement.”

The climate deal, which requires nations to limit temperature rise to well below 2 degrees Celsius, became an international law on Nov. 4 after garnering the support of 97 countries.

Yolanda demonstrated that the consequences of climate inaction have left developing countries, with their low adaptive capacity, at the mercy of extreme weather events.

Scientists predict stronger and frequent storms as a result of climate change.

The Philippines is considered a “net emitter,” as it ranked sixth in Asia with a share of only 0.31 percent of the world’s total emissions of greenhouse gases, data from the Senate Economic Planning Office.

At the world conference on DRR in Sendai, Japan, in March 2015, the eyes of the world were on the Philippine delegation led by Legarda as it successfully pushed for the adoption of the Sendai Framework for Disaster Risk Reduction.

The Sendai Framework is the successor agreement to the Hyogo Framework for Action, the global blueprint signed in 2005 for championing DRR.

The Philippines also chaired from 2015 to 2016 the Climate Vulnerable Forum, a group of countries that are highly vulnerable to global warming. It was formed in 2009.

The climate action since 2013 validated Yolanda as a watershed in climate governance. The provision unlocking the Calamity Fund and Quick Response Fund (QRF) in the national budget for both preparedness and response now allows agencies to purchase and preposition relief goods, medicines, communication and rescue equipment even before calamities strike.

Authorizing government agencies to tap the QRF for preparedness has been a “tremendous boost to risk reduction strategies,” Legarda said in an interview.

She also noted the modernization of the equipment of the weather bureau with the purchase of Doppler radars and flood monitoring systems since 2013.

On the ground, however, she said the Philippines had better prepare for disasters in the magnitude of Yolanda to avoid a repeat of the havoc and paralysis that characterized the 2013 tragedy.

“With the Yolanda tragedy, we became the face of climate vulnerability. The world lent ears to our voice in the climate talks. We were credible. We had the moral suasion. We were regarded as the leader of the vulnerable, the champion of climate justice,” De Guzman said in an interview.

He, however, acknowledged that “not much has genuinely changed” after Yolanda.

“Many wounds remain unhealed. The tragic memories, the mental and emotional traumas, still linger. There are faulty recovery and reconstruction efforts that leave some resettlements unused or unsustainable, mainly because of the absence of basic utilities and services, such as water and electricity, lack of alternative livelihood, and the distant workplace. Early recovery planning is key and needs strengthening,” he said.

Legarda stressed that the national government needed the full cooperation of the local government units (LGUs) and their constituents since “laws won’t work if they (DRR plans and programs) remain ink on paper.”

Since 2013, there have been only 167 local climate change action plans out of the 1,634 cities and municipalities in the country, De Guzman said. The number represents just 10 percent of the LGUs.

Local action plan is crucial to preparedness and DRR programs because it can warrant the legal use of local calamity funds even in the absence of disasters.

“The main reason for the few plans is the lack of competency in LGUs to formulate them,” De Guzman said.

Dealing with the lack of local action plans, the CCC rolled out a capacity building initiative for LGUs called “Communities for Resilience” (Core) in March.

The results of this writer’s study highlighted acute problems in ground coordination and logistics before and after Yolanda, which were largely blamed on the absence of a department-level agency for climate change adaptation (CCA) and DRR.

For climate resilience to become a national priority, the study recommended the creation of the Department of DRR and CCA.

The proposed department will supervise and empower all hazard-prone LGUs to combat climate change by assigning to them a primary, not secondary, role in preparing and implementing DRR plans, programs and strategies suitable to their locales.

The study also recommended full devolution of government powers to LGUs in the short term, and a possible shift to federal form of government in the long term.

It said the impetus for a holistic national risk reduction strategy through a grassroots approach was crucial for building resiliency in the country.

Since households are at the forefront of mitigating the impacts of natural hazards, the Philippines’ first line of defense is the robust engagement of local communities in implementing DRR programs and strategies, the study said.

It noted that ownership of the process toward reducing disaster risks and losses is the linchpin of any DRR initiative.

With the government providing the correct policy framework and adequate support system for mitigating risks, resilient local communities will be placed in a much better position to respond and adapt to the impacts of climate change.