Robredo jokes: Will SC oust me next from VP post? 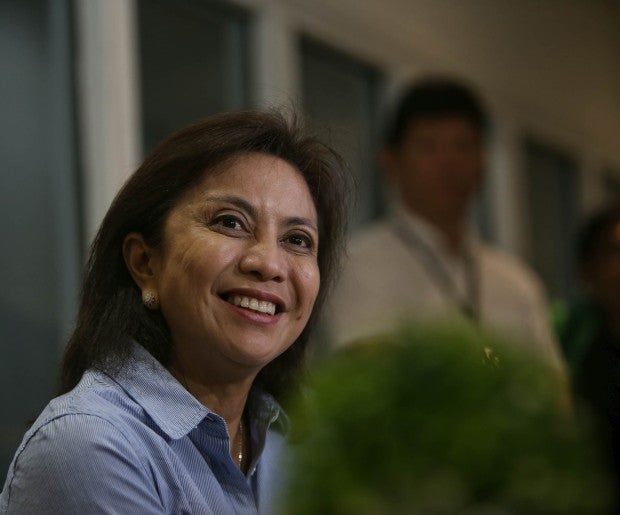 MANILA — What will be the next controversial move of the Supreme Court? After allowing the burial of dictator Ferdinand Marcos at the Libingan ng mga Bayani, will it oust Vice President Leni Robredo in response to the electoral protest filed by his son and namesake, former Senator Bongbong Marcos Jr.?

That thought may have crossed the minds of some after the high tribunal’s controversial decision about the Marcos burial that jolted Martial Law victims.

Apparently it has crossed Robredo’s mind, too.

Speaking at the Ateneo de Manila University, Robredo made a joke early in her speech as she greeted Ateneo Vice President Maria Luz Vilches.

“First let me greet the Vice President… of Ateneo,” she said, eliciting a smattering of chuckles and claps.

Then she dropped the bombshell: “Eto siguradong hindi matatanggal ito ng Supreme Court (This one I’m sure will not be ousted by the Supreme Court),” Robredo said.

The remark, which was not in her prepared speech, made the Ateneo crowd erupt in hoots and cheers.

The younger Marcos lodged an electoral protest against Robredo’s victory in the May polls after the electronic count showed him 200,000 votes behind Robredo.

Robredo’s remark was the first time she publicly addressed speculations that the current composition of the Supreme Court was friendly to the Marcoses, fueling speculations that she might lose in the electoral protest if it reached the high tribunal.

She proceeded to talk about her profound disappointment at the court’s ruling on Marcos’ burial at the memorial grounds for heroes.

“On that same day, we received news that rocked the nation: the Supreme Court voted 9 to 5 in favor of giving the late dictator Ferdinand Marcos a hero’s burial. Disappointing, heartbreaking news,” she said.

But she said she saw a silver lining.

“On Facebook, I saw that hundreds of Ateneans made a stand for what is right. I congratulate you for the sureness of your moral courage and I thank you for the strength of your conviction,” Robredo said, drawing another wave of applause.

The issue of the Marcos burial, she said, was quite relevant to any discussion on economics and governance.

“We cannot talk seriously about the Philippines’ growth prospects without considering as well the depth and scope of our country’s history,” she said.

Robredo also spoke about gender rights and appeared to allude to President Duterte’s recent crass remarks about her knees at an event in Tacloban City.

“Everywhere, we bear witness to the many ways that women are undermined: catcalling, sexual abuse and harassment, even glass ceilings in the workplace. Often, we are reduced to our bodies. This is unacceptable,” she said.

“Tasteless remarks and inappropriate advances against women should have no place in our society,” she said, echoing her own statement two days before addressing the President’s words.

At the end of her speech, the Ateneo crowd rose to its feet, showering her with applause. The students mobbed the Vice President and sought selfies with her.  SFM

Read Next
For many supporters, Trump is a thing called hope
EDITORS' PICK
Kai Sotto continues to inspire Filipinos by sharing his passions and stories with Smart Prepaid
1Sambayan to nominees: Stick to word of honor
EDITORIAL: Good news, bad news
Alex Eala wins Grand Slam on Independence Day: ‘I hope I made my contribution to the country’
Trust Robredo’s political instincts – Kaya Natin! convener
Ahead of ONE: Full Blast II, Mongkolpetch warns Elias Mahmoudi: ‘Watch out for my fists’
MOST READ
Duterte, Mayor Sara unlikely to run under same slate in 2022, says Lacson
PH to have cloudy, rainy Monday — Pagasa
1Sambayan to nominees: Stick to word of honor
China cautions G7: ‘small’ groups don’t rule the world
Don't miss out on the latest news and information.