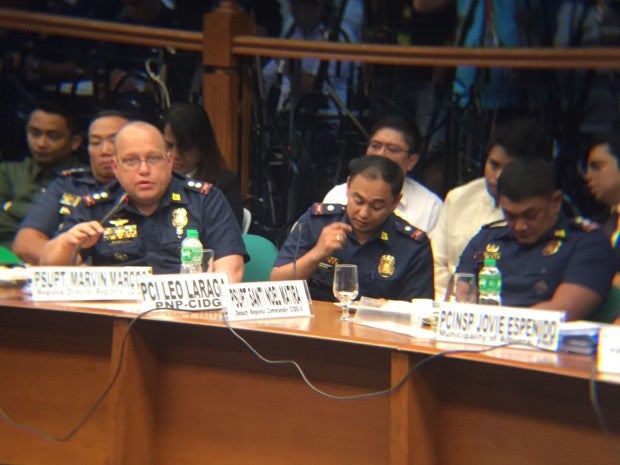 The cop, who called the scene of the crime operatives (Soco) even before Albuera, Leyte Mayor Rolando Espinosa was killed, has refused to surrender his cellular phone to his superiors.

Supt. Santi Noel Matira, a member of the Criminal Investigation and Detection Group (CIDG) unit in Region 8 that raided Espinosa’s cell at the provincial jail, invoked his right to privacy during the hearing of the Senate committee on public order and dangerous drugs on the killing of the mayor on Thursday.

“I’d like to reiterate my instruction earlier for Supt. Matira to turn over his cellphone to his director…right now,” said Senator Panfilo Lacson, chair of the committee.

Lacson then asked if the cop was invoking his right against self-incrimination “because the contents of your cellphone are incriminating?”

“No, your honor,” Matira said as he clarified that he was invoking both his right to privacy and against self-incrimination

“Not necessary your honor,” Matira said.

“Anyway, if you don’t want to cooperate and you’re invoking your right against self-incrimination then so be it,” Lacson said.

Before this, Lacson and some of his colleagues grilled Matira for calling Soco at 3:49 a.m. of November 5 or before the team was able to enter the provincial jail at 4:30 a.m. CDG