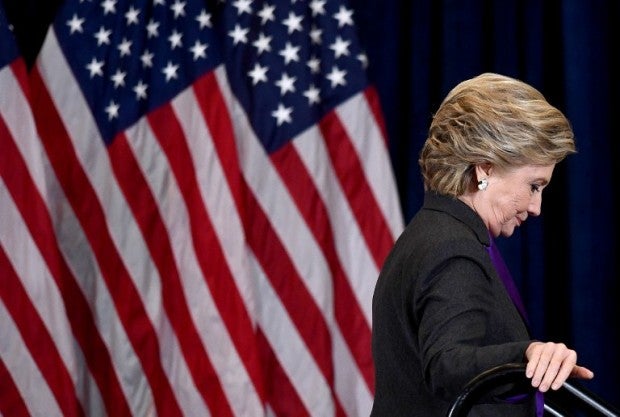 US Democratic presidential candidate Hillary Clinton steps down a staircase after making a concession speech following her defeat to Republican President-elect Donald Trump, in New York on November 9, 2016. AFP

NEW YORK, United States — It was meant to be a day of celebration. Instead, Hillary Clinton brought down the curtain on her historic run for the White House — the likely coda to a decades-long career in the public eye.

The former first lady, senator and secretary of state had hoped Tuesday would catapult her to the Oval Office, capping a lifetime of public service. Instead, Republican rival Donald Trump pulled off a political upset for the ages.

READ: Clinton says US owes Trump ‘a chance to lead’

The 69-year-old Clinton — so close to breaking through the glass ceiling and becoming America’s first woman president — ended up skipping her own Election Night party at the cavernous Javits Center in New York.

But on Wednesday, it was time to face the music.

Elegant in a dark pantsuit — what else — with a purple blouse and lapels, in perhaps an unspoken nod to the need to unite the blue of the Democratic Party and the red of the Republicans, Clinton faced her tearful supporters.

“Last night, I congratulated Donald Trump and offered to work with him on behalf of our country,” the defeated candidate said at a Manhattan hotel.

At times steely and at other times emotional, Clinton vowed to work with President-elect Donald Trump and urged fellow Democrats to allow him the chance to lead the deeply divided country.

“Last night, I congratulated Donald Trump and offered to work with him on behalf of our country,” the defeated candidate said at a Manhattan hotel, in her first public remarks since the Republican’s shock victory.

“I hope that he will be a successful president for all Americans.”

“We have seen that our nation is more deeply divided than we thought,” she said. “We owe him an open mind and the chance to lead.”

Clinton’s bid to become America’s first female commander-in-chief shuddered to a halt after one of the nastiest campaigns in modern US history.

When the election season kicked off some 18 months ago, she seemed as close to a sure bet as there could be in politics, bringing name recognition, a polished resume and fundraising prowess to the White House race.

But she faced a surprisingly bitter race in the Democratic primary against the populist Bernie Sanders, who exploded onto the scene riding a wave of support from young voters energized by his calls for income equality, free college and ridding politics of big money.

And against Trump, Clinton was ultimately unable to convince a big enough slice of the American electorate that the reality TV star was “temperamentally unfit” for the nation’s highest office.

Opponents said the private email case showed her carelessness in handling state secrets and was another example of how Clinton felt the rules didn’t apply to her.

Voters consistently described Clinton as untrustworthy and she was hamstrung by an FBI investigation into her use of a private email server as secretary of state.

Opponents said the private email case showed her carelessness in handling state secrets and was another example of how Clinton felt the rules didn’t apply to her.

Her unexpected defeat in the White House race ushered a political novice who had disparaged her as “crooked Hillary” into the Oval Office — though in his victory speech, Trump, 70, spoke warmly of his Democratic opponent.

“Hillary has worked very long and very hard over a long period of time, and we owe her a major debt of gratitude for her service to our country. I mean that very sincerely,” he said.

The latest partial results showed Trump winning the White House with 290 Electoral College votes to Clinton’s 228, though she was leading the popular vote count by nearly 239,000, according to CNN.

On Wednesday, Clinton said her presidential run was bigger than her own ambitions.

“This is not the outcome we wanted or we worked so hard for and I’m sorry that we did not win this election for the values we share and the vision we hold for our country,” she said.

“This is painful, and it will be for a long time, but I want you to remember this: our campaign was never about one person or even one election.”

She said constitutional democracy “enshrines the peaceful transfer of power, and we don’t just respect that, we cherish it.”

“It enshrines other things too,” she said. “The rule of law, the principle that we are all equal in rights and dignity, freedom of worship and expression. We respect and cherish these values, too, and we must defend them.”

“This is painful, and it will be for a long time, but I want you to remember this: our campaign was never about one person or even one election.”

It appeared to be a gentle jab at Trump, who called for a ban on Muslims during the campaign, and during one presidential debate appeared to threaten Clinton with jail if he were elected.

But Clinton ended her speech — perhaps the last of her political career — on a hopeful note.

“I still believe as deeply as ever have that if we stand together and work together with respect for our differences, strength in our convictions and love for this nation, our best days are still ahead of us,” she said.

“So, my friends, let us have faith in each other. Let us not grow weary. Let us not lose heart, for there are more seasons to come, and there is more work to do.” CBB