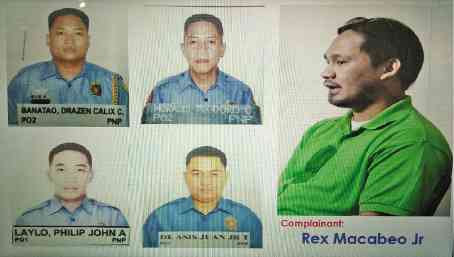 Four Quezon City policemen face charges of robbery-extortion after a motorist accused them of stealing P31,000 in cash from his car last week.

The four policemen—all assigned with the Tactical Motorized Unit of the Quezon City Police District (QCPD)—have since been disarmed and relieved of their posts.

Cut off by a police car

The complainant, Rex Macabeo Jr., went to the QCPD headquarters on Tuesday to recover the stolen cash, according to Senior Supt. Guillermo Lorenzo Eleazar, QCPD director.

Macabeo said that around 7 p.m. on Nov. 4, he was driving on Commonwealth Avenue toward Fairview when a police car cut him off.

He added that uniformed policemen surrounded his vehicle and ordered him to get out. He kept on asking the lawmen what his violation was but they did not reply, Macabeo said.

When the policemen searched the trunk and the inside of his vehicle, they found a bolo hidden underneath one of the rubber mats.

“The policemen then began to threaten Macabeo with 12 years of imprisonment because of the bolo. They told him that he would be brought to Batasan police station,” Eleazar said.

According to the victim, the four lawmen asked him for money in exchange for letting him go. Macabeo said he refused although Morales took the P360 in cash tucked into the plastic jacket of his driver’s license.

When he got home, Macabeo said he noticed that the P31,000 in cash he had set aside for his pregnant wife’s hospital bills was missing. The money was hidden in the pocket of a pair of pants he kept inside the car.

“Our investigator has verified that he was indeed carrying that amount of money,” Eleazar said, adding that the four policemen denied taking the cash. They returned, however, the victim’s bolo.

According to Eleazar, the four were relieved of their posts and placed in the custody of the QCPD Headquarters Support Unit. They face charges of robbery-extortion aside from administrative cases.

“This should serve as a warning to our police that our internal cleansing continues,” Eleazar said, adding: “We also appeal to the public to support us in our campaign and report to us these kinds of incidents.”