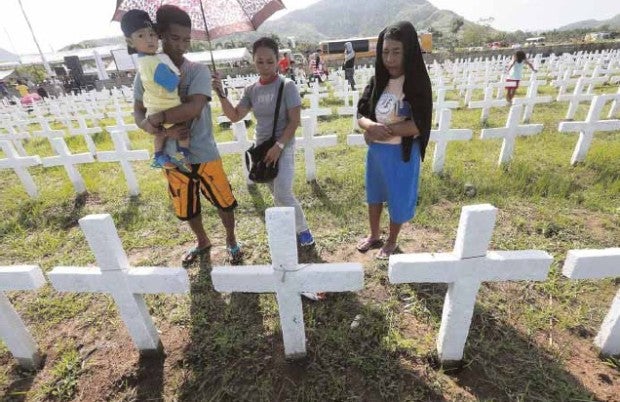 MASS GRAVE Survivors of Supertyphoon “Yolanda” remember their loved ones who perished in the tragedy three years ago during a visit to amass grave at Holy CrossMemorial in Barangay Basoar, Tacloban City. —JOAN BONDOC

A review commissioned by the Aquino administration showed the level of preparedness of the Philippines in dealing with the dangerous consequences of climate change such as devastating typhoons.

Less than a year before Supertyphoon “Yolanda” (international name: Haiyan) struck, the World Bank, in cooperation with the Department of Budget and Management (DBM) and the Climate Change Commission (CCC), conducted a general public expenditure review of the climate policy of the Philippines (from 2012 through February 2013).

What the government managed to achieve from 2009 to March 2013 was a “paradigmatic shift away from disaster response to prevention,” said the review, titled “Getting a Grip on Climate Change in the Philippines: Executive Report” and prepared by the World Bank team led by Christophe Crepin.

Noting the passage of the Climate Change Act (CCA) and the Philippine Disaster Risk Reduction and Management Act (PDRRMA), the World Bank found that conceptually, the climate policy framework was in place as climate change adaptation and disaster risk reduction (DRR) management policies had converged at the policy level.

The report noted that before the CCA’s passage, programs on climate change had focused on mitigation. This was the most important development in the pre-Yolanda period, a positive development that gained wide praise from the international community.

The Philippines then joined 86 countries that “set up formal national coordinating bodies for DRR, which created a common language, vision and understanding of the responsibility for program nationally,” Wahlstrom said an interview with the Inquirer.

But significant “institutional gaps” remained on the national and local levels, the report said.

For one, the CCC, the lead policymaking body that provides climate policy coordination and direction within the government, is a small national agency with broad scope and responsibilities but “limited local presence.”

The review found that coordination within the bureaucracy was a huge challenge, and countless barriers remained for closing these gaps. On climate action, it noted that the CCC “lacks the capacity to engage with all LGUs (local government units).”

Before the government could correct these institutional gaps, Yolanda struck on Nov. 8, 2013.

In 2012, Congress dealt with some funding loopholes in the two earlier laws by legislating Republic Act No. 10174, the People’s Survival Fund (PSF), to provide “long-term finance streams” or funding support for climate action.

Sen. Loren Legarda principally authored the CCA and the PSF, and cosponsored the PDRRMA.

While the CCA and PDRRM spelled out the climate change policy of the Philippines, these laws had not been fully implemented for various reasons, principally because of then President Benigno Aquino III’s failure to convene the CCC right at the outset of his term that began in 2010.

The President sits as chair of the CCC, whose day-to-day operations, however, are  run by the vice chair and two other commissioners.

For the first half of Aquino’s six-year term, DRR had not been his administration’s priority. He was even heavily criticized for the Yolanda debacle.

Only after the storm did Aquino become aggressive toward climate change adaptation, as he himself ordered the constitution of local chapters of National Disaster Risk Reduction and Management Councils (NDRRMC) as the LGUs’ first line of defense in times of calamities.

No legislation or amendatory measure had been passed since 2012. But the Yolanda debacle hastened the implementation of existing climate laws.

Congress provided the biggest impetus to climate action by unlocking “Quick Response Funds” (QRF) and Calamity Funds (CF) in the General Appropriations Act (GAA) for DRR use in 2014. The QRF and CF allocations in the GAA show that a hazard-prone country like the Philippines spends billions of pesos yearly just for dealing with the impacts of climate change.

In hindsight, these much-needed funds could have been used for rural development and easing poverty.

Legarda lamented that the Aquino administration, through the National Housing Authority, had failed to use P20.7 billion earmarked in 2016 for housing assistance to Yolanda survivors.

Another P18.433 billion went to the National Disaster Risk Reduction and Management Fund (NDRRMF) but was unreleased as of Sept. 30, 2016, she said.

“We hope that we can fasttrack the construction of permanent housing for the intended recipients if only to bring renewed hope to those who have survived the strongest typhoon to hit land,” Legarda said in a privilege speech on Monday, the eve of Yolanda’s third anniversary.

Legarda, chair of the Senate finance committee, reminded the 4-month-old Duterte administration that the NDRRMF, when this was legislated under the Aquino administration, was no longer just a calamity fund.

“We should use it to build resilience, reduce and prevent risks in our communities, and to take proactive action so that natural hazards will not turn into disasters that kill and maim our people, and impede our development,” she said.

In a recent interview, former Budget Secretary Florencio Abad said the P129 billion in the GAA for 2016—earmarked for climate expenditures—was a “huge investment” for dealing with climate change.

“More importantly, the 2016 budget builds on the lessons of Typhoon Yolanda as well as focusing on climate change adaptation. This prioritization reflects the national government’s major support for enhancing disaster preparedness and resilience in vulnerable communities,” Abad said.

The total picture of the budgetary pie for QRF, CF and funding for the rehabilitation and reconstruction of ravaged areas reached a whopping P45 billion, he said.

It should be noted that it was only in 2014 when the Aquino Cabinet was given clear instructions to use both the CF and the QRF for capital expenditures for predisaster operations, besides response and rehabilitation activities.

Read Next
President blames media for ‘trivial’ Robredo remarks
EDITORS' PICK
SANTIS Delicatessen: The road to survival is sweet and savory
Gilas out to prove Korea win not a fluke; Tab fires back at ‘lucky shot’ remark
Piolo Pascual: The Ultimate Heartthrob continues to level up
Duterte to issue memo on face shields this week
LOOK: ‘Low vaccination’ turnout in 4 Manila sites after no walk-in policy
Eleazar: PNP open to ICC probe but PH judicial process is working
MOST READ
Duterte to issue memo on face shields this week
Palace: Face shields no longer needed to be worn outdoors
DFA opening 10 satellite offices to boost passport services
Lacson or Pacquiao a possible presidential candidate for NPC – Sotto
Don't miss out on the latest news and information.