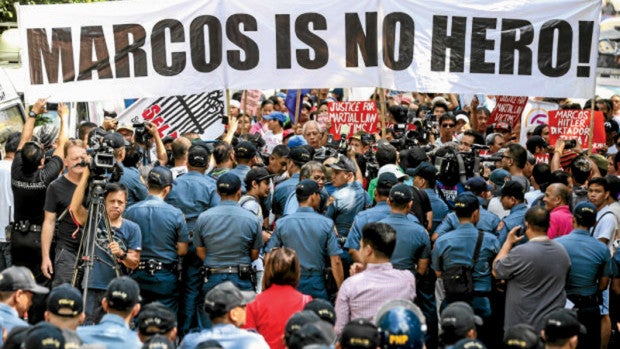 ANTI-MARCOS Militants protesting the burial of former President Ferdinand Marcos at Libingan ng mga Bayani are blocked by layers of police personnel near the Supreme Court as they wait for its ruling on the case.—LYN RILLON

An organization of human rights lawyers on Wednesday called on the bar examinees to wear black as a sign of mourning over the Supreme Court’s ruling affirming the validity President Rodrigo Duterte’s decision allowing the burial of former dictator Ferdinand Marcos at the Libingan ng mga Bayani (LNMB).

“Rights lawyers from NUPL are dismayed and outraged by the questionable ruling allowing the hero’s burial of dictator Marcos – a lawyer who exploited the law to legitimize tyranny, plunder and autocracy – and are encouraging its bar candidates, as well as other lawyers and law students, to wear black during the bar exams this Sunday, November 13 at the University of Sto.Tomas in Espana, Manila as a sign of mourning for the demise of the rule of justice,” National Union of Peoples Lawyer (NUPL) Chairperson Atty. Neri Colmenares said.

There are over 6,000 bar examinees. Nov. 13 will be the second Sunday of the month-long examination.

Colmenares, a victim of human rights violation, is one of the seven petitioners who asked the high court to stop the Executive Department from pushing with the interment of Marcos at LNMB.

He said they will try to convince Duterte to change his mind.

At the same time, he said they are also looking at the possibility of filing a motion for reconsideration before the Supreme Court.

“Puwede pa namang makumbinsi si Pangulong Duterte na magbago ang isip. We will continue with the protest movement…Pag-uusapan pa namin yung motion for reconsideration,” Neri said, adding that they can do it simultaneously.

In its ruling, the high court the SC said there is no clear constitutional or legal basis to hold that there was grave abuse of discretion amounting to lack or excess of jurisdiction which would justify the Court to interpose its authority to check and override an act entrusted to the judgment of another branch.

The SC also said that notwithstanding the call of human rights advocates, the Court must uphold what is legal and just and that is not to deny Marcos his rightful place at the Libingan ng mga Bayani, adding that even the framers of the country’s Constitution intend that full respect for human rights is available at any stage of a person’s development, from the time he or she becomes a person to the time he or she leaves this earth. JE