Who wears the pants? Swing state Florida has its say 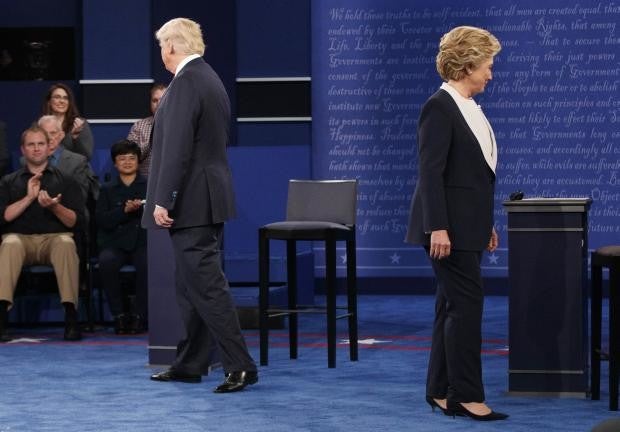 MIAMI, United States — When 74-year-old Leonor Perez cast her vote for Hillary Clinton under a cloudless Florida sky, there was not a shadow of doubt in her mind: “It’s time for a woman to wear the pants in this country.”

Long lines formed in the cool breeze as polls opened Tuesday in Perez’s neighborhood of Hialeah, a primarily Cuban enclave near Miami, and across the battleground Sunshine State.

READ: Clinton, Trump fight to the finish in bitter US presidential vote | Election Day: Americans choose between Clinton and Trump

Sharply divided in support for the Democrat Clinton and her Republican rival Donald Trump, swing state Florida is seen as critical to the chances of both presidential candidates.

Peter Fernandez, a 21-year-old dishwasher born and raised in Hialeah, said he voted for the billionaire property mogul.

“I don’t really know much, I’m not very educated,” he said. “But he speaks his mind. He’s not afraid to say things that could irritate a couple of folks.”

“I don’t really know much, I’m not very educated,” he said. “But he speaks his mind. He’s not afraid to say things that could irritate a couple of folks.”

Some 6.4 million of the state’s 14 million-strong electorate cast their ballots before Tuesday, taking advantage of early voting in the past two weeks.

Many hoped to avoid long lines that have plagued elections in the past. Others were just eager.

“I wish I could vote early and often for her,” Annette Katz said about Clinton, as she handed out flyers for a local vice mayoral candidate south of Miami.

Just hours before the polls close Tuesday, Republican Senator Marco Rubio issued a last-minute appeal for cash from supporters, saying turnout in key parts of Florida was “trending in the Democrats’ favor.”

Technical problems have marred past Florida elections, and ballots no longer have the punch-holes and “hanging chads” that characterized the 2000 election, which George W. Bush won over Al Gore in the state by just 537 votes.

Now, the ballots come on large sheets of paper. Voters fill in circles with ink and then scan them into machines.

On Tuesday, AFP witnessed a glitch at one polling place in the suburban village of Palmetto Bay, where voters said one of the two machines broke down in the first half-hour.

“There was a little bit of a borderline brawl in there,” said a woman, who gave her name as Veronica.

“One machine didn’t scan in a ballot and the gentleman was very irate and started screaming at the attendant,” she told AFP. The machine was working again by mid-morning.

“There was a little bit of a borderline brawl in there,” said a woman, who gave her name as Veronica.

At the University of Miami, some students around campus wore “I Voted” stickers on their shirts, although a Get Out The Vote table in the student center dining hall was unstaffed, and no one was seen taking any of its free buttons or pens at midday.

A female campaign volunteer at a polling place near the university said it had been “very quiet.”

Brianna Hernandez, 20, said volunteers had already registered more than 2,300 of the school’s 10,000 students this year, and arranged transport to polling places for early voting.

“I think that the media puts down millennials,” said the dual major in political science and history.

“Students do want to be involved — they just don’t want to be labeled.”

Experts say Florida has seen a surge in minority voting, particularly from Hispanics and African-Americans, that could potentially turn the tide against Trump.

Eighty-seven percent more Hispanics and more than nine percent more blacks voted early in 2016 than in the 2012 election, according to the latest data from University of Florida professor Daniel Smith, who studies voter turnout.

“We are making history,” said Jimmy Torres, coordinator of Boricua Vota in Orlando, an organization that promotes the Puerto Rican vote.

“The numbers are impressive and the people are going out to vote.”

“The numbers are impressive and the people are going out to vote.”

At a polling station in Little Havana, a historic Cuban neighborhood near downtown Miami, Norma Carcamo, a 58-year-old Nicaraguan waitress, said that unlike previous elections, this time voting felt like “a responsibility.”

“Trump is a businessman, he does not know politics, he is very racist, he is against immigration, and Latinos have built the base of this country,” she told AFP.

“Hillary has more political experience and we have to give her a chance.” CBB