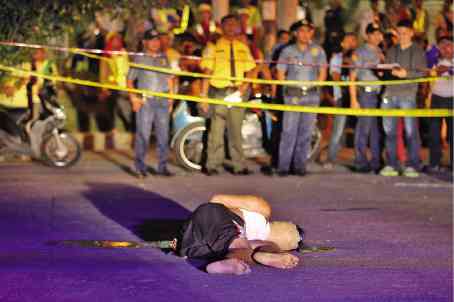 The body of a summary execution victim dumped on Liwayway Street, Makati City on Tuesday holds a morbid fascination for onlookers. —RAFFY LERMA

Five people were killed by motorcycle-riding gunmen in separate incidents from Monday until early Tuesday, the police said.

Three of the fatalities were gunned down by motorcycle-riding men in Makati City past midnight Tuesday.

Abad and his friend Cariangoy were lounging in front of a retail store on J. Victor Street at 12:25 a.m. when they were shot.  Sudanio, who was sleeping in a jeepney parked nearby, was roused by the gunfire. When the gunmen saw him, they shot him before fleeing.

Recovered from the scene were 14 casings from a 9-mm gun and a casing from a .45-cal. pistol.

The police said the three victims were known drug users and pushers in the area although this was denied by residents in a compound beside the store.

“This is [President] Duterte’s fault because he’s encouraging the killings. They’re shooting people like dogs,” a resident who refused to be identified told the Inquirer.

Other residents said that Sudanio had no vice, adding: “He doesn’t even have money. We just give him food and we let him sleep inside the jeepney.” 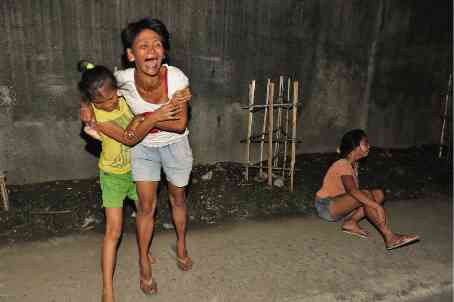 The sight of a slain drug suspect’s body in Navotas City is too much for his mother. Jay-R Gabuya was killed allegedly in a buy-bust operation. —RAFFY LERMA

In Barangay Addition Hills, Mandaluyong City, a barangay volunteer who was on the police drug watch list was shot dead at 8:20 p.m. Monday.

Senior Supt. Joaquin Alva, Mandaluyong police chief, said that 33-year-old Joel Abrenica was on duty in front of the barangay outpost on Nueve de Febrero Street when two motorcycle riders in helmets and jackets killed him.

In Malate, Manila, gunmen on motorcycles killed a woman at 12:15 a.m. Monday at the corner of Singalong and Quirino Avenue. At press time, the victim has yet to be identified by authorities who described her as 22 to 26 years old, 5 feet tall and dressed in a black blouse. —WITH REPORTS FROM JODEE AGONCILLO AND AIE BALAGTAS SEE