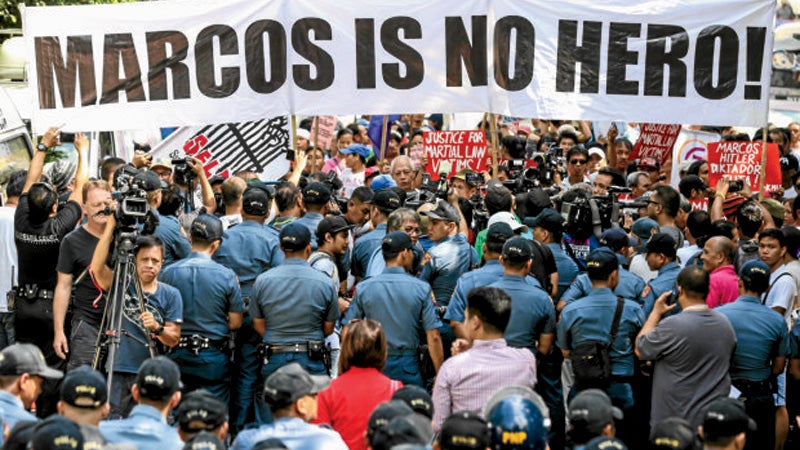 ANTI-MARCOS Militants protesting the burial of former President Ferdinand Marcos at Libingan ng mga Bayani are blocked by layers of police personnel near the Supreme Court as they wait for its ruling on the case.—LYN RILLON

Albay Rep. Edcel Lagman said he felt “very bad” about the Supreme Court ruling on the burial of the late dictator Ferdinand Marcos because while his brother and other martial law victims did not even “have crosses to mark their graves, their very tormentor and violator will be honored” at a heroes’ cemetery.

“This decision will never lead to a healing. It will just exacerbate the wounded feelings as well as the gross injustice suffered by the victims of human rights atrocities,” said Lagman, a petitioner opposing the burial of the late dictator Ferdinand Marcos at Libingan ng mga Bayani in Taguig City.

Lagman said that while he respected the Supreme Court decision, he could not understand why “a majority of the Supreme Court justices would resolve for the burial of a judicially and historically confirmed dictator, plunderer and transgressor of human rights” at Libingan.

Protests were launched in different parts of the country only mere hours after the official announcement has been made by the high court.

On the campus of the University of the Philippines in Diliman, a huge crowd gathered around the Oblation statue, composed of survivors of human rights violations during the repressive regime, students, faculty members and members of people’s organizations.

Chants of “Marcos, Hitler, diktador, tuta!” rang through the crowd, reminiscent of the rallying cry of activists during martial law.

A martial law victim, Carmencita Florentino, could barely speak as she was handed a  microphone by her fellow protestors in front of the Supreme Court in Manila.

“It’s really infuriating. Saddening …. It hurts me so much. It’s like I want to shout, release all my tears I felt at the torture I experienced during martial law, the torture my family felt,” she said.

She said it was as if the rights of the Filipino had been “trampled on.”

“What will happen to our history? It will appear that Marcos is a hero. Is that a hero? Is he like (Jose) Rizal? He is not a hero. He is a dictator, a killer, an oppressor,” she said, her voice cracking.

Even if he is an ally of President Duterte, Senate President Aquilino “Koko” Pimentel III said he would tell him that Marcos was no hero and did not deserve to be buried at Libingan.

Pimentel said he was scheduled to meet with the President on Monday and he would tell him the legal battle over the issue was over and that the controversy was now “back to the political arena.”

In a statement, Vice President Leni Robredo said the ruling was inconsistent with morality and the spirit of the 1986 Edsa People Power Revolution.

For former activist and human rights champion Etta Rosales, it was not only the decision that surprised her. The number of justices who allowed the burial was a great shocker.

“They have done a great injustice,” Rosales told the Inquirer in a phone interview.

“I’m so so disappointed by the ruling. I didn’t expect that big of a gap: 9-5. It’s a sad day for our history … They asked me if I’m going to appeal. But the vote is 9-5. There’s practically a 50 percent difference. How do you appeal that?” said Rosales, one of the petitioners who is in Singapore for a human rights conference.

Fr. Jerome Secillano, executive secretary of the Catholic Bishops’ Conference of the Philippines’ Permanent Committee on Public Affairs, said the court ruling was “a slap in the face of human rights victims during the Marcos regime.”

Jose Luis Gascon, chair of the Commission on Human Rights, said the tribunal’s ruling did not erase the late dictator’s atrocities.

Gascon said “the human rights considerations in both the Constitution and international law run counter to the Duterte administration’s intention to bury the former dictator at Libingan ng mga Bayani, particularly the guarantee for reparation and guarantee against nonrepetition of human rights violations.”