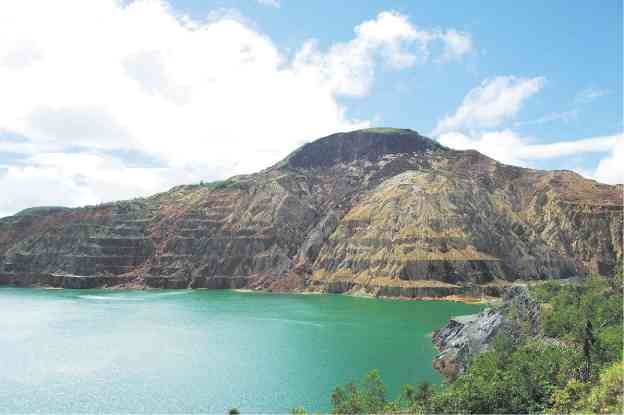 Marcopper’s open pit at Mt. Tapian in Marinduque, as shown in a photograph in 2010, taken 14 years after the country’s worst mining disaster. —INQUIRER PHOTO

A plan to pursue the multimillion-dollar suit against a global mining firm gained the support of the Catholic Church and civil society groups in Marinduque province to recover the cost of damage left by the 1996 mine tailings spill, tagged as the worst mining tragedy in the Philippines.

The provincial board of Marinduque, in June, issued a resolution to refile the case in a Canadian court against the Toronto-based Barrick Gold Corp., the company that absorbed Placer Dome, the parent company of the defunct Marcopper Mining Corp.

In 1996, one of Marcopper’s drainage tunnels gave way, unleashing about 200 million tons of tailings into Boac River. Traces of mine wastes are still visible in the water today.

The Marinduque provincial government, in 2005, filed a $100-million class suit against the mining company at the Nevada district court in the United States.

But after 10 years of court proceedings, the Nevada State Supreme Court threw out the case for forum non conveniens, meaning the US was a wrong jurisdiction to hear it.

In 2014, Barrick Gold offered a $20-million settlement but the Marinduque provincial board turned it down after it felt that the amount was not enough to compensate for the environmental damage wrought by the mining disaster on the island.

While the decision to reopen the case in Canada drew support, various groups in the province were divided as to whether they would continue engaging the services of law firm, Diamond McCarthy.

The US-based firm originally represented the Marinduque government under a contingency arrangement, meaning it would be paid a fraction of whatever the court awards the province once a resolution or a settlement is reached.

In a letter on Oct. 13, Marinduque Gov. Carmencita Reyes asked the provincial board to grant her the authority to enter into another contract with the firm for the “immediate filing of suit” in British Columbia or Ontario.

Reyes also sought authority to sign an agreement with the New York-based Parabellum Capital LLC as a third party funder. The purpose of a funder is to shoulder the costs during litigation, she said.

But the Marinduque Council for Environmental Concerns (Macec) opposed Reyes’ move to continue engaging lawyers from Diamond McCarthy saying it is “unnecessary and costly.”

“We remain positive and we support the intention of the provincial government to refile the case in Canada, but we strongly oppose the continuous engagement of Diamond McCarthy … for the case,” it said.

Macec instead urged the provincial government to “directly engage the services of Canadian firms [or] lawyers for the case.”

In a telephone interview on Monday, former provincial board member and Macec mining committee head Adeline Angeles said Diamond McCarthy does not have a presence in Canada and it would need to hire lawyers from Lax O’Sullivan Lisus Gottlieb, a Canadian firm.

In effect, “the province [will be] hiring multiple layers of lawyers [and] that is not only costly but unnecessary [because] that will significantly affect the final return or net recovery [for Marinduque],” she said.

“There are several other Canadian law firms that expressed interest [to represent Marinduque] and are amenable to a contingency arrangement,” Angeles said.

Boac Bishop Marcelino Antonio Maralit, in a letter to the provincial board, said he supported the case’s refiling but “clearly, the immediate signing of said proposal … without the necessary changes in favor of the province would be very disadvantageous.”

The provincial board, in a special session on Oct. 25, voted against authorizing Reyes to enter into the contracts. It has yet to reach a decision on the choice of a legal representative.