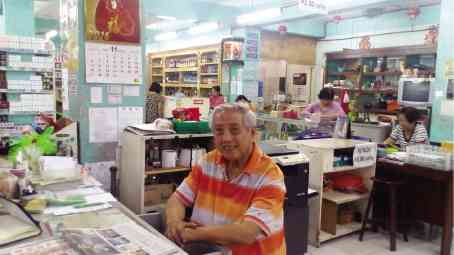 TACLOBAN CITY—It was triple whammy for Rosemarie Obina when Supertyphoon “Yolanda” (international name: Haiyan) hit Leyte province and the rest of the Visayas on Nov. 8, 2013.

Obina lost her mother and three siblings during the storm surge generated by the supertyphoon which also damaged her house in Barangay 71 here. As if these were not enough, her stall at the public market was ransacked by looters after the onslaught.

But instead of crying and sulking, Obina chose to stand up and pick up the pieces for the sake of her daughter.

Local businessman Jack Uy also chose to to stay in Tacloban despite losing P10-million worth of goods to looters who ransacked his Astra Mart, one of the oldest grocery stores in the city located on the ground floor of his family’s three-story building on Burgos Extension.

Uy, 71, recalled that just hours after floodwater receded, people started converging at the entrance of the grocery.

“Although the grocery was flooded due to the storm surge, there were still items that could be salvaged,” he said.

Uy said he even distributed food to typhoon victims who later became agitated and demanded that he open the steel gate so they could enter his store.

“They were many and armed with steel bars. I had to protect the members of my family as well as those who sought refuge in the building. So I was forced to open the grocery,” he said.

He said looters took everything in his store, including non-food items like cash registers and refrigerators.

They also emptied his “bodega” (warehouse) located on the second floor of the building.

“Some of them even attempted to enter the third floor, where we lived. But I told them not to harm my family and those who stayed with us during the typhoon because we would defend ourselves,” Uy said.

In the case of Obina, looters forcibly opened her stall on the ground floor of the Tacloban City market and took everything.

It was painful for Obina who was mourning the death of her mother, Benita, brothers Jose and Richard, and sister Estrella who died during Yolanda’s onslaught.

“I was really in a state of shock and was so depressed at that time. Yolanda did not only kill my mother and siblings, but my source of income as well,” she said.

“I have to move on for the sake of my daughter. I have to learn to accept what happened to me,” she said.

Both Uy and Obina chose to fight back by reopening their stores.

Uy, president of the Tacloban Chinese Chamber of Commerce and Industry, reopened Astra Mart on Jan. 8, 2014.

“Well, I have little connections and some friends who helped me start again,” Uy said.

“I was mad about what happened to us. Looters, many of them were not actually from Tacloban but from areas not affected by Yolanda, took everything,” he said. “But I have to reopen Astra Mart again thinking that there were no stores open at that time where people could buy what they needed, like rice and other food items.”

He said he and his family could easily leave Tacloban and return once the city’s situation normalizes.

“But I was born and raised here. I love Tacloban and I want to be part of its rebuilding after Yolanda devastated the city,” Uy said.

As head of the business chamber, Uy also encouraged other business owners to reopen their establishments and in the process, help survivors meet their daily needs as well as start reviving the economy.

In the case of Obina, she had no choice but to start again.

She applied for a loan from the Department of Trade and Industry (DTI), which offered financial help to small entrepreneurs dislocated by Yolanda.

She, however, has yet to repair her house.

Uy and Obina said they have to remain positive and let go of any grudge against those who ransacked their stores.

After all, they said, they are already in the process of recovering and healing.