SC votes, 9-5, for burial of Marcos at Libingan

The gods of Padre Faura on Tuesday answered the prayers of Ferdinand Marcos’ family and supporters, allowing the burial of the late dictator at Libingan ng mga Bayani in Taguig City.

Cheers of “Marcos pa rin” erupted at the gates of the Supreme Court in Manila more than an hour before it announced its decision upholding President Duterte’s order allowing the burial of Marcos at Libingan.

The high tribunal voted 9-5 with one abstention to dismiss the petition filed by anti-Marcos groups and personalities to block the President’s order, Supreme Court spokesperson Theodore Te announced at 2:10 p.m. on Tuesday.

Hundreds of pro-Marcos supporters celebrated, some weeping and others waving Philippine flags. Anti-Marcos activists were outraged, including petitioners, who vowed to ask the court to reconsider. Riot police stood between the opposing groups rallying outside the court.

The dictator’s son and namesake, former Sen. Ferdinand “Bongbong” Marcos Jr., thanked the high court for taking “a magnanimous act to uphold the rule of law” and expressed his gratitude to Mr. Duterte.

“It is our sincerest hope that this will lead the nation toward healing,” Marcos Jr. said after decades of discord over the burial of his father.

A visibly elated Ilocos Norte Gov. Imee Marcos, daughter of the dictator, called for “everyone” to comply with the Supreme Court decision.

Divisive
The governor, who rushed to Padre Faura Street, upon hearing news about the decision, was mobbed by reporters, cameramen, photographers and her supporters upon her arrival there.

“Let us help Apo President … Duterte. Let us help him achieve his wish for unity, that the Philippines be whole and be healed. Thank you! It’s still Marcos! It’s still Duterte! Let the Supreme Court decision be upheld,” she said, to shouts of joy from her supporters.

Burying a dictator accused of massive rights violations and corruption at the heroes’ cemetery has long been an emotional and divisive issue in the country, where Marcos was ousted in the 1986 Edsa People Power Revolution.

He flew to Hawaii, where he lived with his wife and children in exile until he died in 1989.

His body was flown back to his hometown in 1993, where it has been displayed in a glass coffin. But his family wants his remains transferred to the heroes’ cemetery.

Te cited five reasons the magistrates voted to uphold Mr. Duterte’s order based on the summary of the decision penned by Justice Diosdado M. Peralta:

The majority of the justices did not find any grave abuse of discretion by the President in ordering the burial of Marcos at Libingan because this was done under the mandate of Article VII, Section 17 of the Constitution to ensure the faithful execution of laws.

Mr. Duterte is not bound by the agreement between then President Fidel V. Ramos and the Marcos family to have the remains interred in Batac, Ilocos Norte.

The President is empowered under the Administrative Code to reserve the cemetery plot for Marcos until a law is passed stating otherwise.

Despite Marcos’ alleged human rights abuses and corrupt practices, the tribunal could not deny his right to be acknowledged based on the other positions he held or the awards he received. His being a former President, military personnel, veteran and Medal of Valor awardee “satisfies the public requirement.” 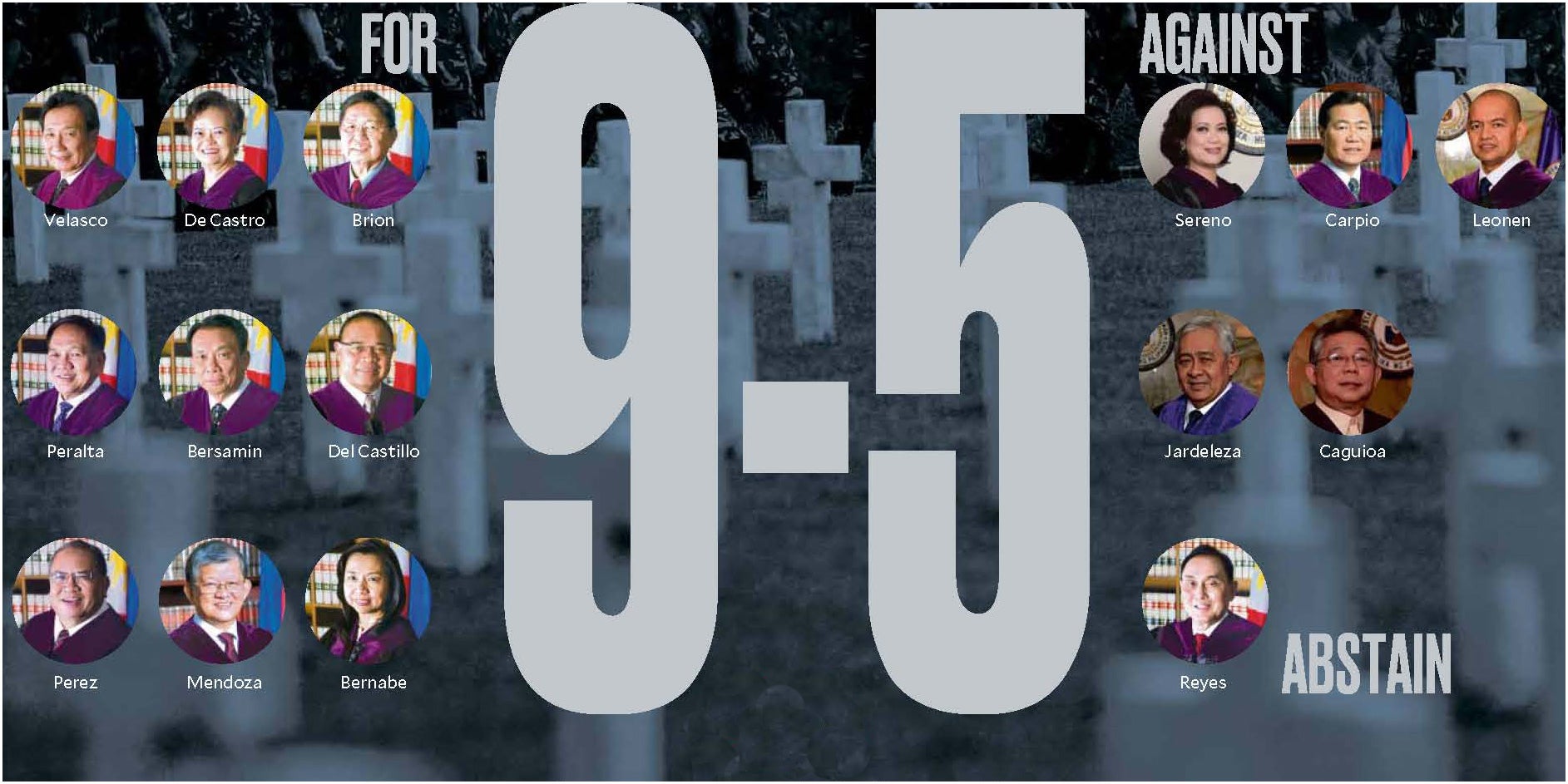 Marcos has not been convicted of any crimes involving moral turpitude. The majority said that the various cases cited by petitioners were all civil cases and had no bearing on the case.

In her dissenting opinion, Chief Justice Maria Lourdes Sereno said Mr. Duterte acted with grave abuse of discretion because his order to bury Marcos at Libingan violated the country’s obligations to do justice for human rights victims.

Sereno said that aside from monetary remedies, the government was bound to provide “nonsymbolic” reparation to the human rights victims.

She cited the legislative and judicial recognition of Marcos as a dictator, plunderer and human rights violator.

She called the majority decision “myopic” because it was solely based on honoring Marcos as a soldier who was entitled to a military burial.

“Regardless of the promised national unity that the proposed burial will bring, I cannot, in good conscience, support such as expedient and shortsighted view of Philippine history,” Sereno said.

Associate Justice Marvic Leonen said Marcos ceased to be qualified to lie among heroes at Libingan when he was ousted in February 1986.

He said his ouster through a bloodless revolution was the “strongest form of dishonorable discharge from office since it is meted out by the direct act of the sovereign people.”

Peralta said the Supreme Court decision was part of
the majority of the justices’ desire for national healing and reconciliation.

He said Marcos should be viewed and judged in his “totality” and not just his sins. “While he (Marcos) was not all good, he was not pure evil either. Certainly, just a human who erred like us.”

“There are certain things that are better left to history—
not this court—to adjudge. Beyond that, it is ultimately for the people themselves, as the sovereign, to decide, a task that may require the better perspective that the passage of time provides. In the meantime, the country must move on and let the issue to rest,” he said. 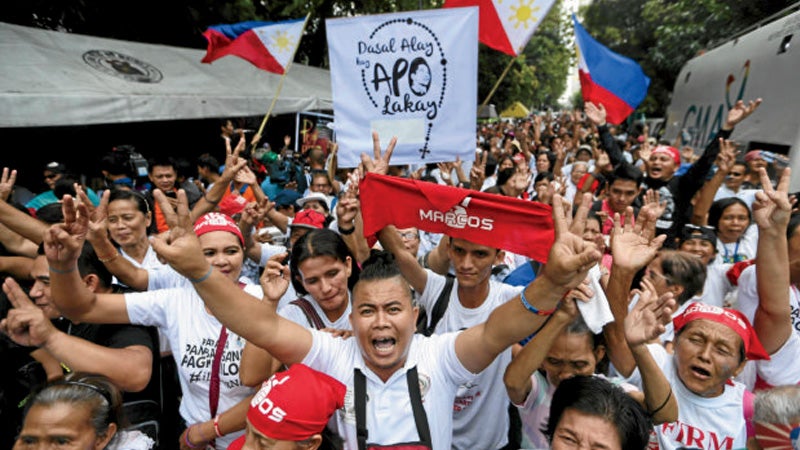 Peralta wrote that Marcos’ ouster through the Edsa People Power Revolution had no legal meaning “other than its obvious political consequence.”

He said it was not the Supreme Court’s duty to “divine” significance of election results or protest rallies or be “misled by the noise of a boisterous crowd drowning the message of the silent (or silenced) majority.”

He said the tribunal should be guided by constitutional and legal rules and “not by uncertain ambiguous and confusing messages from the actions of the people.”

Associate Justice Arturo D. Brion concurred that Marcos’ burial had become a political issue when Mr. Duterte made a campaign promise to bury Marcos at Libingan and was supported by the electorate when he won the presidency with a huge margin.

Associate Justice Jose P. Perez said Mr. Duterte’s victory showed that there was no longer a “national damnation” of Marcos.

Associate Justice Jose C. Mendoza said the majority did not pass judgment on whether Marcos deserved to be buried at Libingan.

He said the majority merely exercised “judicial restraint” to leave “truly political” issues at the discretion of the President. —WITH REPORTS FROM KRISTINE FELISSE MANGUNAY, AIE BALAGTAS SEE, JOEY A. GABIETA AND AP