Robredo on flirtatious Duterte: I’m used to being his ‘pulutan’ 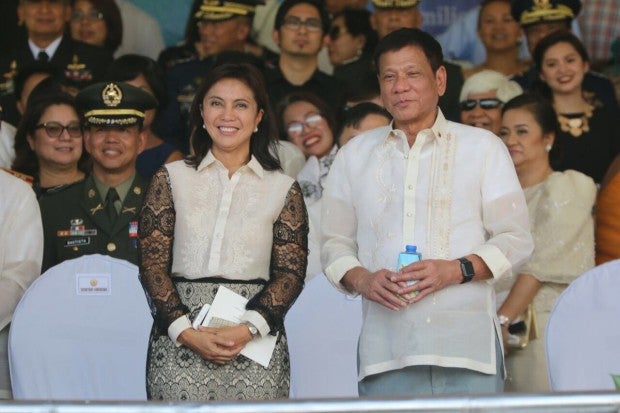 Vice President Leni Robredo said she has gotten used to the jokes of President Duterte, especially that the latter would always tease her even during formal events.

Duterte once again openly flirted with Robredo, widow of Interior Secretary Jesse Robredo, in a public event during the third anniversary of the onslaught of Supertyphoon “Yolanda” in the city.

Duterte recalled to the audience, mostly survivors of the typhoon, how he and Finance Secretary Carlos Dominguez once ogled at Robredo’s knees during a Cabinet meeting in Malacañang.

Duterte said he would notice Robredo’s legs whenever she wears short skirts, even suggesting that seeing them was “a view.”

“You know Ma’am Leni would always wear skirts which are shorter than usual. At one time, Dominguez asked me come closer because I was far from them. But I told him, ‘Come here. Look at (Robredo’s) knees,’” he said as he looked at the Vice President.

“Maybe she noticed (that I was looking at her). I wanted to tell her, ‘Ma’am maybe next time you just wear shorts… But after our third meeting, she was already there at the far end of the table. I lost the view during the Cabinet meeting,” he continued.

The President also said he often teases Robredo during their meetings to lighten the mood.