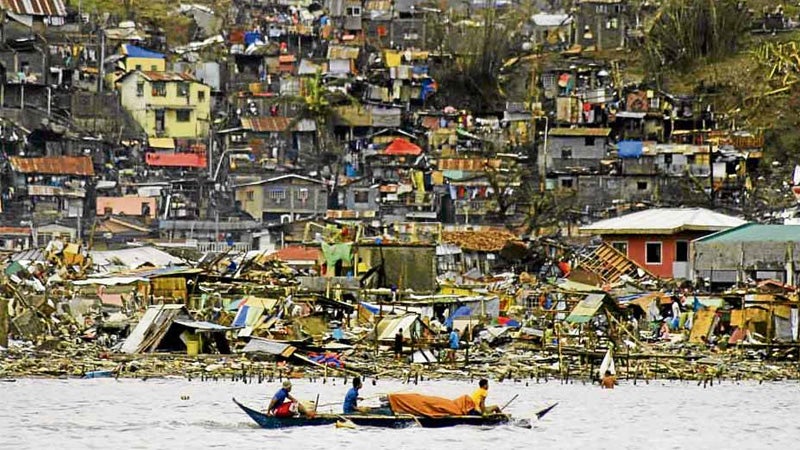 DESTRUCTION BY THE SEA Debris of houses made of light materials litter Tacloban port and bodies still float on the Leyte Gulf several days after Supertyphoon “Yolanda” struck the city in Leyte province in 2013. —MARCALVIC ESPLANA

At 7 a.m. on Nov. 8, 2013, Supertyphoon “Yolanda” (international name: Haiyan) made landfall in Tacloban City, bringing winds that howled like jet engines and blasted everything in their path.

The gateway to Eastern Visayas, Tacloban was flattened in less than three hours.

Along with Palo town, also in Leyte, the city, which played host to the return of Gen. Douglas MacArthur and US forces to liberate the Philippines at the close of World War II in 1944, slid back into a wasteland of stinking corpses and debris.

Summing up the immensity of the destruction, The Associated Press (AP), in a story released three days after the humanitarian crisis erupted, hinted of failures in both preparedness (or the utter lack of it) and response by concerned government agencies.

“The tragedy is another reminder that nature’s fury is sometimes so immense that it can overwhelm even the most diligent preparations. Combine that with a string of unfortunate circumstances—some man-made—and the result is the disaster of epic proportions that the country now faces,” AP said.

The nightmare started when Yolanda made its first landfall over Guiuan, Eastern Samar, at 4:40 a.m., flattening the town and displacing some 54,000 people.

Yolanda then moved westward, making a second landfall in Tolosa, Leyte province, at 7 a.m. and proceeded to obliterate Tacloban. It made a third landfall in Daanbantayan, Cebu province, at 9:40 a.m. An hour later, it made another landfall on Bantayan Island before hitting Concepcion, Iloilo province, at noon.

While maintaining its strength, Yolanda approached the Calamian Group of Islands in Palawan province and made a sixth landfall in Busuanga, Palawan, at 8 p.m.

Yolanda continued its northwest trajectory while traversing the West Philippine Sea before it exited the Philippine area of responsibility at 3:30 p.m. the following day.

and Management Council(NDRRMC), which were issued from November 2013 through April 2014, and referencing them with accounts of several survivors in Tacloban during a field visit early this year.

The survivors retold their harrowing battle with storm surges and howling winds. (The Inquirer is omitting their names to protect the victims from further trauma.)

Relying on past brushes with powerful typhoons, Tacloban had hoped the roaring winds would die down soon without much damage.

But even those who sought refuge in public schools that served as makeshift evacuation shelters were not spared Yolanda’s wrath, as weather officials had not anticipated “up to 7-meter wave height” of storm surges could decimate the city, according to NDRRMC SitRep. No. 4.

Pandemonium broke loose as the first wave of storm surge came, followed by the next one, and finally a wall of water 6 to

Survivors L. C., of Barangay 88 in San Jose district and M. D., of the nearby Barangay 85, recounted how they survived the surging seawater that quickly engulfed San Jose Central School.

Barangay 88, a coastal community of shanties, was wiped out. Some 2,000 bodies were recovered in the area later.

M.D. was sleeping with her son when seawater started flooding the school, forcing evacuees to clamber up to the second floor. She held her son tightly as they were being carried away by the churning waves. They miraculously survived the ordeal.

“I thought it was the end of the world,” D. R. said, recalling that waters quickly engulfed the classrooms.

She caught an empty water drum and used it as a flotation device, while her son held on to a floating branch of an acacia tree. Mother and son ended up in the schoolyard.

She thanked God for giving them the strength to endure, “and for answering our prayers.”

When asked if they had ignored the storm surge warning, she said the evacuees had no concept of a storm surge before Yolanda.

“[The government] could have used ‘tsunami-like’ [to describe it] since we know what a tsunami is,” D. R. protested, alluding to an error in risk communication that proved tragic for Tacloban.

J. L., 31, went home to check on his family’s property when the storm surges flooded San Jose district. He left his wife, T. L., 32, and six children at the evacuation center.

“There was intermittent rain and wind, but not that strong at 6 a.m. (of Nov. 8),” he recalled.  “Then when the storm surges came, I panicked. I didn’t know what to do.”

He had a vivid description of the might of Yolanda: toppling trees, electric posts and houses, flying rooftops, cars and debris, and floating bodies.

All houses in Barangay 88 were violently washed away, he said.

Four of his six children, aged 4 to 8, who had sought refuge at the evacuation center with their mother, drowned.

Read Next
Public school teachers nationwide to receive double their Christmas bonus
EDITORS' PICK
Manila is 78th most expensive city in the world for foreign workers
TeaM Energy pushes development programs to help in pandemic rebound
Want to help local farmers? Shop small and eat Real Food
Piolo Pascual: The Ultimate Heartthrob continues to level up
ICC is everything but a court of ‘white people’
Garcia softens stance, meets IATF halfway on swab-upon-arrival policy
MOST READ
Sharon Cuneta on living in the US: ‘Nagagawa ko lahat ng normal na bagay’
Mike Nieto asks fans: ‘No below the belt remarks’ toward South Korea
Duterte-Duterte tandem possible but ‘winnability is another question’ — Binay
Pangilinan says LP making efforts to reach out to Lacson, Isko, others
Don't miss out on the latest news and information.