Kerwin Espinosa breaks down upon learning of father’s death 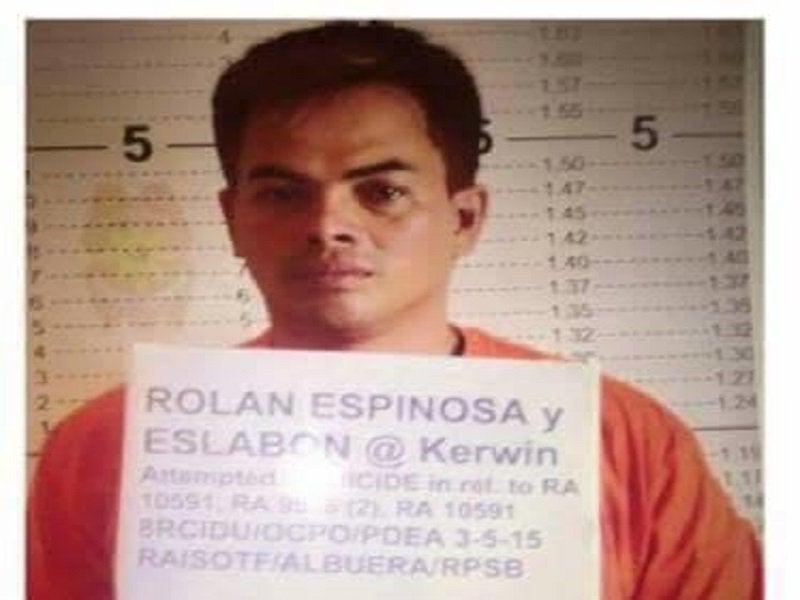 ALBUERA, Leyte — Kerwin Espinosa, the man accused of being the top drug lord of Eastern Visayas, broke down over the phone on Saturday after he was told that his father had been killed by policemen while in detention.

Espinosa, who was arrested in Abu Dhabi last Oct. 17, was crying so hard he no longer used up his allowed three-minute phone call at an Abu Dhabi prison.

A staff member of the Espinosa family, who asked not to be named, told the Philippine Daily Inquirer that Kerwin called him up on Saturday afternoon to inquire about his father, Mayor Rolando Espinosa Sr. of Albuera town in Leyte.

At that time, the source said he was at the morgue of the St. Peter’s Funeral Homes in Ormoc City, Leyte to attend to the body of the mayor.

When he was told that his father was killed by the members of the Criminal Investigation and Detection Group in Eastern Visayas (CIDG-8), the source said Kerwin started crying over the phone.

“Nganong si Daddy man nga wa man siyay labot! (Why did they kill Daddy? He was not involved!),” the source quoted Kerwin as shouting over the phone.

A series of loud sobs followed before the line went dead, he added.

Kerwin was awaiting his extradition following his arrest in Abu Dhabi on Oct. 17.

The source said Kerwin called him up again on Sunday and this time the suspected drug lord sounded different and expressed his desire to talk to Chief Insp. Jovie Espenido, the Albuera police chief.

He said he was surprised because before Mayor Espinosa was killed, Kerwin was mad at Espenido and had accused the police chief of being under their payroll when the latter was assigned in Davao City. Espenido was the one who convinced Mayor Espinosa to execute an affidavit and identify those who protected his son’s operation.

In exchange for his cooperation, the police chief assured the mayor of his safety.

Mayor Espinosa kept his end of the bargain and gave a list of 226 names whom he claimed were either part of or protected his son’s illegal drug trade.

Of the number, Espenido filed cases against 47 government and police officials and members of the media at the Office of the Ombudsman, Regional State Prosecutor’s Office and the National Internal Affairs Service.

Espenido placed Mayor Espinosa under his protective custody and allowed him to stay in his office until Oct. 5 when the mayor was brought to the sub-provincial jail in Baybay City, Leyte, after an arrest warrant was issued against him for charges of illegal possession of firearms and drugs.

A month later, Espinosa was killed in what the CIDG claimed was as a shootout past 3 a.m. on Nov. 3 inside his cell. Also killed was alleged drug pusher Raul Yap, a native of Albuera who was staying in another cell. The CIDG team was there to implement a search warrant for illegal drugs and firearms, claiming they received information that Mayor Espinosa resumed his illegal drug trade from jail.

The CIDG claimed that Espinosa was armed with a .38-pistol and shot at them, forcing them to return fire.

The mayor was shot in the head, chest and stomach while Yap suffered bullet wounds in the stomach.

The Espinosa family bewailed the killing and raised suspicion that Espinosa was silenced after he linked high ranking police and government officials to his son’s illegal operation.

Last Sept. 7, Mayor Espinosa submitted a notebook to the Regional Trial Court in Ormoc City containing the names of several police officers and government officials who were allegedly part of his son’s illegal drug trade.

He also submitted returned checks – including those recovered from the body of slain Espinosa lawyer, Rogelio Bato, who was earlier killed in an ambush.

The lawyer of Mayor Espinosa lamented that the shooting of the mayor was an “overkill.”

Based on the autopsy conducted by the Scene of the Crime Operatives (SOCO), Leilani Villarino said the mayor suffered four gunshot wounds.

She said the autopsy was conducted by Chief Insp. Benjamin Lara, medico-legal officer of SOCO-Central Visayas.

Villarino said they wanted to get samples of the mayor’s liver and stomach to test for presence of illegal drugs.

But she added the organs had been raptured by bullets.

Villarino cited the possibility that the mayor was shot while lying down.

Rhoda Magale, common-law wife of Mayor Espinosa, said two expensive rings and a watch of the mayor were missing.

She told the Philippine Daily Inquirer that she brought the rings to the mayor after he was brought to jail because he wanted to wear them.

The mayor was wearing the watch when he transferred to the sub-provincial jail, she added.

When they collected the mayor’s remains, Magale said the jewelry could not be found.

She clarified that she was not accusing the CIDG of stealing the jewelry especially since the crime scene had been cordoned off.  SFM