The new BTC seeks to bring more voices into the group tasked to draft a proposal for a new version of the proposed Bangsamoro Basic Law (BBL).

In his speech, Duterte said one of the reasons why he decided to run as president was because the other candidates was not talking about the conflict in Mindanao and how it could be solved.

“I was appalled by the fact that nobody was talking about Mindanao. Every one of them – the usual infrastructure project and blah, blah, blah. But never one of—not one of them ever said that they would take a second look to what will happen in Mindanao,” said Duterte, who hails from Davao City.

Government panel chief Irene Santiago told INQUIRER.net that the expanded commission “will be composed of people who are known to listen to many voices.” 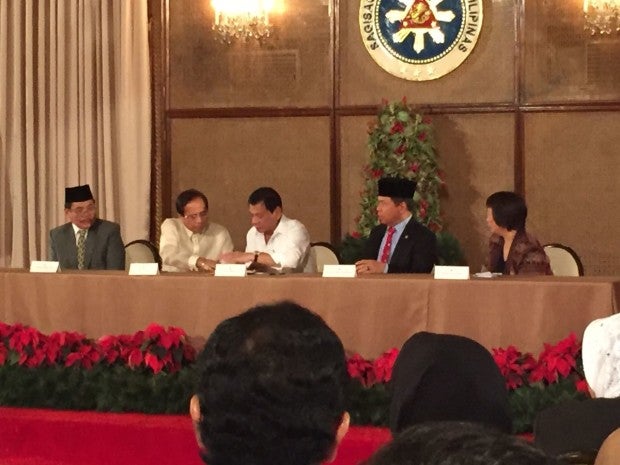 READ: Peace panel to make sure PH won’t end up like Colombia
Under the new EO, the BTC will submit its proposal to the Office of the President and will recommend amendments to the 1987 Philippine Constitution. It may also convene a Bangsamoro Assembly that will serve as a consultative body for the proposed BBL.

The BTC was first formed through EO 120, which was pursuant to the 2012 Framework Agreement on the Bangsamoro. The EO was amended to strengthen and expand the commission and to clarify that the BTC will be disbanded with the ratification of the Bangsamoro Basic Law through a plebiscite.

Duterte said his only desire is to have peace in Mindanao without the shed of blood.

He said he also talked to the Senate President and the House Speaker to fast track the the BBL once the new version is proposed in Congress.  RAM/rga