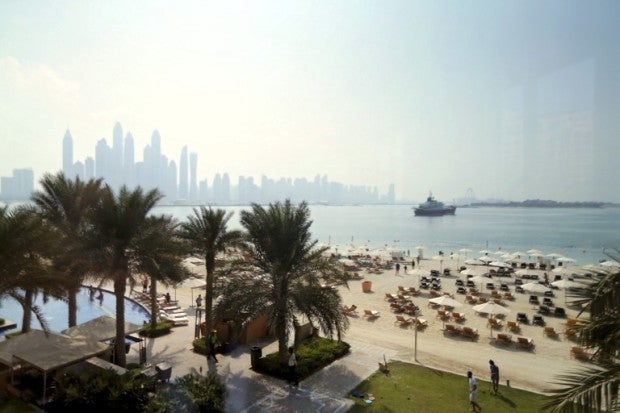 A picture taken from behind a window, shows the Palm Beach hotel, with the Dubai skyline seen in the background, on November 4, 2016. AFP

The plant — said to be the first of its kind in the Middle East and North Africa — is to capture up to 800,000 tons of CO2 a year, the Carbon Capture Company Al Reyadah said.

“Once it’s ready in terms of CO2 emissions, it will be like taking 170,000 cars off the streets,” UAE Energy Minister Suhail al-Mazrouei said.

It will capture CO2 emissions from major steel producer Emirates Steel Industries (ESI) in Abu Dhabi, before injecting the gas into the emirate’s oilfields to boost production there, it said.

“Once it’s ready in terms of CO2 emissions, it will be like taking 170,000 cars off the streets,” UAE Energy Minister Suhail al-Mazrouei said.

The minister said the project had been under study “for a very long time” and cost around 450 million dirhams ($120 million).

Scientists say carbon capture is a good solution to decrease emissions of carbon dioxide, a heat-trapping gas that contributes to climate change.

Similar projects to capture CO2 are under way in other countries including in Saudi Arabia. CBB/rga