At 7, Balang Sanchez can be considered an old hand in business as he peddles foodstuff after school to support dreams that are much bigger than kids his age
By: Bernadette Nicolas - Editorial Administrative Assistant / @BNicolasINQ
Philippine Daily Inquirer / 12:58 AM November 06, 2016 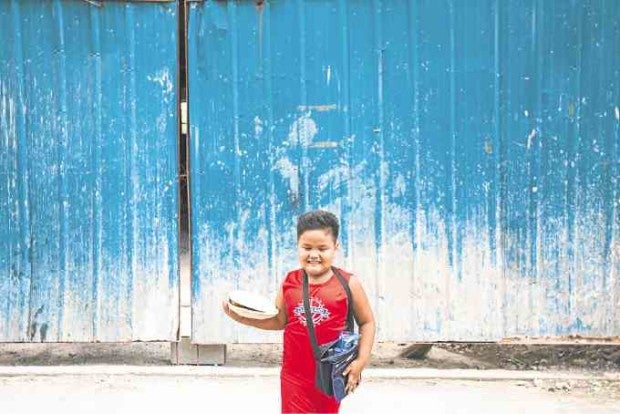 He was probably the youngest entrepreneur featured in the franchise expo hosted by the Association of Filipino Franchisers, Inc. (Affi) at the World Trade Center in October.

At 7,  John Luis Sanchez or “Balang” can be considered an old hand in business who can teach a thing or two to folk intending to go into retail.

After all, he has been trawling the streets of the university belt for customers, using his arsenal of boyish charms, polite manners and family lore to get them hooked to his regular fare of  native rice cakes, vegetable and pork spring rolls or palabok noodles.

In fact, he knows enough about market profile and customer preferences to tell Mama Tet—Matet Roxas, his aunt and labor partner—just what to cook for his itinerant food shop the following day.

Balang also showed initiative and confidence when he begged Mama Tet to allow him to join the trade instead of just tagging along with his older brother Buboy, 11, who also sells snacks on the streets around National University (NU) in Sampaloc, Manila. 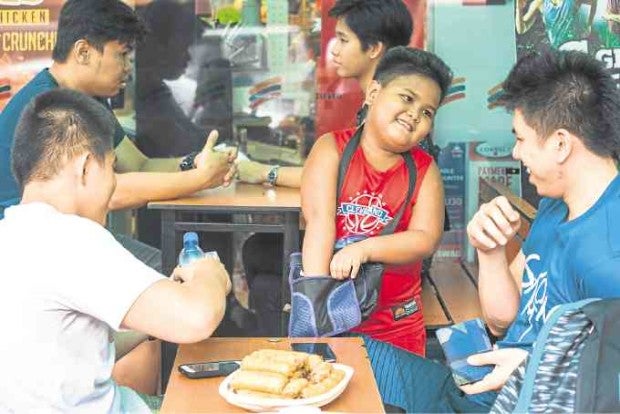 CHANGE IS COMING A cheerful Balang fishes for change while a customer chats him up. PHOTO BY JILSON SECKLER TIU/INQUIRER

Unlike other entrepreneurs however, Balang isn’t driven by the profit motive.

Asked why he was peddling food every afternoon instead of enjoying childhood games after school like kids his age, Balang said simply: “para may pangbaon, makatulong sa pamilya  (for my school allowance and to help out my family).”

Balang’s mother, Lovely Liza, entrusted the boy to her because she could not take care of her six children, Roxas said of her cousin.  Since she was already working back then and was still single, she accepted the challenge of raising the boy, Roxas said.

Liza managed to visit Balang occasionally while he was growing up, until she died of a heart problem in 2014.

The boy’s father, Jojo Jimenez, suffered a stroke three years ago and has not fully recovered.  He already has another family but Balang and his siblings still visit him and try to keep close ties with him.

Balang, his three siblings and two half-sisters now live with their Mama Tet and Mama Lola (Roxas’ mother, Magda Sanchez) in a house just behind NU.  Though pregnant with her second child,  Mama Tet prepares the food that the brothers would sell in the afternoon when they come home from school.

She was initially worried about the then six-year-old roaming the streets alone to sell foodstuff, but “he has dreams. He wants to finish his studies. He wants to buy a house,” she said. 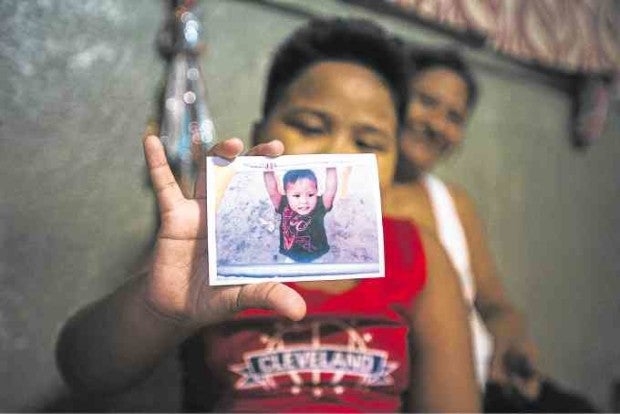 NOT TOO FAR FROM INNOCENCE Balang as a toddler. PHOTO BY JILSON SECKLER TIU/INQUIRER

Wearing a sando, shorts and worn-out flip flops, and carrying his wares with one hand while holding a sling bag full of small plastic bags and plastic tongs on the other, Balang walks the streets of Sampaloc nursing dreams bigger than anyone else his age.

Aside from dreams of becoming a policeman, doctor or firefighter someday, the boy wants to be a real estate agent, “nagbebenta ng bahay,” he describes his future self.

Mama Lola recalled that the “kidpreneur” had promised to provide them a house someday. It just might be a promise that the boy could redeem, given that his list of kindhearted sponsors has been growing.

Aside from a dentist who gives him regular checkups every Tuesday, Balang has won the hearts of  Zarboth Lagumbayan, a staff member at True Blends Tea & Coffee on Jhocson St., and its owner, Joyce Co Yu.

Lagumbayan said he saw himself in the boy selling food around NU because he too used to spend afternoons helping his mother sell food for a living.  He immediately introduced Balang to his boss, Yu, who also took a liking to the boy.

But Yu observed: “He does not know how to compute for change.”  Worried that Balang might get cheated by wily  customers, Yu and her sister Grace helped the boy, teaching him Math basics so he could compute better.

Yu also gave the boy clothes, school supplies and a mini electric fan, among other gifts.  She has remained his most loyal customer as well.

“If he was not able to sell all his foodstuff for the day, he goes to our store because he knows we’ll buy up whatever is left,” said Yu.

Balang kept his new friends secret even from his family, worried that others might take advantage of their kindness as well.

But his secret leaked out after his story was shown onscreen at the franchise expo when he became the face of budding entrepreneurs that the Affi helps and supports through their various programs, and sets up as role models.

Yu’s sister, Grace, recalled how Balang once returned the extra money given him by a teacher.  Asked why, he said simply, “para sa kanila yun (it’s meant for them).”

That could apply as well to the blessings that the boy has been reaping: thanks to his good heart, they’re meant for him.