Rediscovering the ‘best island in world,’ a sirenian on ‘God’s Highway’

PUERTO PRINCESA—Paddling through the navigable portion of the 8.2-kilometer Underground River is a journey through time—its karstic chambers serve as a natural canvas on which vignettes of the past are geologically preserved.

If you’re looking for adventure beyond Palawan’s pristine beaches, this city offers a regulated tour through one of the longest underground rivers in the world located 80 km north of Puerto Princesa.

Considered by speleologists—or cave explorers—an underground estuary, sea tides meet the outflow of freshwater deep into the cave—up to 6 km inside the St. Paul mountain range that frames the river.

With its jaw-dropping natural wonders, the river is officially known as the Puerto Princesa Subterranean River National Park. A Unesco heritage site, it was adjudged one of the new Seven Wonders of Nature in 2012. 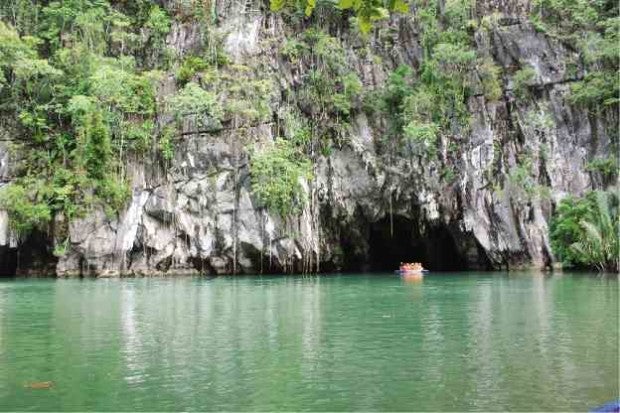 NATURAL WONDER The underground river has been judged one of the new Seven Wonders ofNature in 2012.

One of its well-preserved secrets revealed itself  in 2011, a rare find that stunned the scientific world. Fossilized remains of a sea cow—locally known as “dugong”—was found stuck on the limestone wall 3 meters above the water level in one of the previously unexplored caves.

Thanks to the trailblazing work of speleologists and other scientists belonging to La Venta Geographical Association (La Venta Esplorazioni Geografeche, website: http://www.laventa.it/en/palawan) that explored Palawan in 2007, 2008 and 2011, the sirenia fossil proved to be a rare find.

Two sea cow species—the dugong of the Indo-Pacific region, which includes the Philippines, and manatees of the Atlantic basin—have survived to this day.

The sirenia fossil, however, belongs to an extinct species that roamed Palawan some 20 million years ago during the Miocene era, according to Puerto Princesa Mayor Lucilo Bayron, quoting the findings of the La Venta exploration.

It’s the first such fossil to be unearthed in the Philippines, and the first one to surface in this part of Asia, Bayron said in an interview with the Inquirer. He was quoting Italian scientists who were part of the Palawan expedition that explored Palawan from February to March 2011. 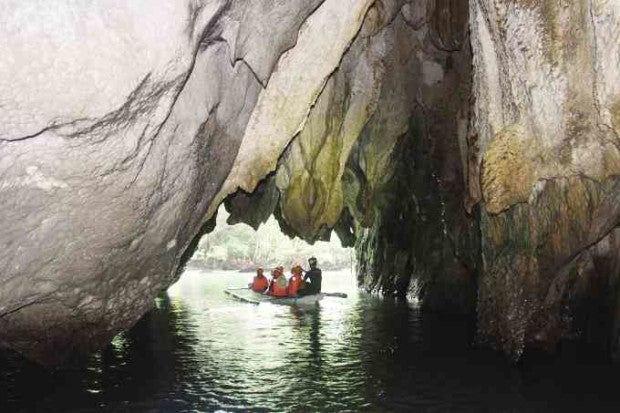 JOURNEY THROUGH TIME Tourists explore the karstic chambers of the underground river on which vignettes of time are geologically preserved.

When asked about the significance of the discovery, Bayron explained that it could lead to a deeper understanding of the biodiversity and geologic history of Palawan.

“Nobody had expected to find a sirenia fossil in Puerto Princesa,” he said. “As extinct species from the Miocene period, the fossil could be a forebear of the current sirenia species that survive to this day here.”

Sirenians are already endangered, protected from poaching by CITES, or the Convention on International Trade in Endangered Species of Wild Fauna and Flora.

La Venta has urged the government to protect the Underground River from “tourism overexploitation,” as 150,000 tourists visited it in 2013 alone.

The complex 8.2-km underground river and cave system is being promoted as the crown jewel of Puerto Princesa, if not Palawan itself.

Bayron is aware of the man-made “pressure” being exerted by tourists on the cave’s delicate ecosystem. The public is allowed only up to 1.2 km from the river’s mouth.

“There is a cavern that allows for a natural turnaround of boats. Beyond that, the river channel becomes narrow. This [natural barrier] protects the inner parts of the cave [from tourism] and spares the bats from being disturbed,” Bayron said.

He explained that the area of the find was off-limits to tourists but open to the public on a limited, strictly regulated basis. A special permit from the Puerto Princesa Underground River Project Management Office must be secured for scientific explorations or visits by journalists or authorized people.

Around 1,200 tourists a day visit the river, with Filipinos still the biggest group followed by Taiwanese, South Koreans, Chinese and Europeans.

“Palawan as a whole is already known as the best island in the world. The least we can do is to ensure that it stays that way, particularly through good governance,” Bayron said.

Bayron may have done a good job protecting the sirenian. The Inquirer found the fossil right where La Venta explorers had left it undisturbed since 2011—some 1.5 km from the river’s mouth.

The bones (ribs and dorsal vertebrae) of the fossil jutted out from the limestone rock, with the fragments of the neural spine and head clearly visible.

The find was mentioned in 2013 by scientists Antonio De Vivo, Leonardo Piccini, Paolo Forti and Giovanni Badino in their report titled “Some scientific features of the Puerto Princesa Underground River: One of the New 7 Wonders of Nature.”

The report vividly described the Miocene-era fossil. (This writer supplied words in parentheses for clarity.)

“The partially articulated thoracic elements include a well-preserved vertebrae (backbone) with exposed neural spine and processes, partial centrum and complete articulation with the head of the ribs. Several bone fragments are well preserved in-situ (in the original place), showing broad and re-curved ribs typical of Sirenians,” it said.

The fossil is estimated to be 60 cm in width. “It is therefore possible to estimate a total length for the individual at 180 cm. This sirenia is obviously coeval (same age or date of origin) with the hosting rock, the St. Paul Limestone, which is Olio-Miocene in age,” the report said.

Interestingly, the report also mentioned a tidbit of information about the symbiotic relationship between the birds and bats that populate the cave.

“Seemingly, the salangane (birds) and bats have reached an agreement about the timing of their entry and exit from the cave. In general, when the bats begin to exit, almost all the swallows are back on their nests,” it said.

Puerto Princesa is an “upcoming major tourist destination” not only for its anchor destinations such as the world-renowned Underground River and Honda Bay, but also for its man-made tourist destinations like the recently established 5.8-hectare Balayong Park, named after a native cherry blossom tree.

“We have other less-known destinations like caves and we host international events like the Asian Dragon Boat Championship on Nov. 11 to 12. So we have devised a strategic direction to create man-made destinations and attractions to get tourists to spend a full time here,” Bayron said.

Tourism is the main industry in this city. There are at least 17 flights a day, carrying a large chunk of the 800,000 tourists who travel to the city annually. Bayron is aiming for 2 million tourists a year by 2019.

The arrival two weeks ago of the MV Legend of the Seas, with 1,805 passengers and 745 crew, brought to 13 the cruise ships that docked at the city pier this year. Two more are expected till December.

For stressed out urban dwellers, Puerto Princesa is indeed a perfect getaway./rga

Read Next
Honesty, RIP: Facts take a beating across US
EDITORS' PICK
Manila is 78th most expensive city in the world for foreign workers
TeaM Energy pushes development programs to help in pandemic rebound
Want to help local farmers? Shop small and eat Real Food
Piolo Pascual: The Ultimate Heartthrob continues to level up
ICC is everything but a court of ‘white people’
Garcia softens stance, meets IATF halfway on swab-upon-arrival policy
MOST READ
Sharon Cuneta on living in the US: ‘Nagagawa ko lahat ng normal na bagay’
Mike Nieto asks fans: ‘No below the belt remarks’ toward South Korea
ICC is everything but a court of ‘white people’
Duterte-Duterte tandem possible but ‘winnability is another question’ — Binay
Don't miss out on the latest news and information.