Therapy offers hope but education is key in dealing with a disorder that shows during infancy and sometimes mistaken for autism
By: Kristine Felisse Mangunay - Reporter / @KFMangunayINQ
Philippine Daily Inquirer / 12:19 AM November 06, 2016 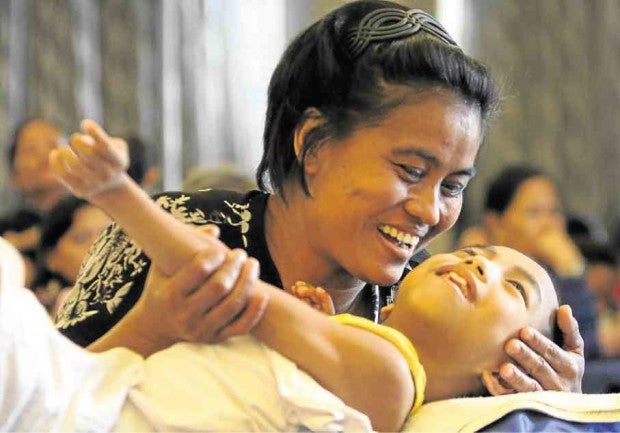 With their doting guardians, 9-year-old Albert Luna Jr. and 4-year-old Joannah Tagaroma form part of the audience at a recent symposium that seeks to educate families about their disability. —RICHARD REYES

At the age of four, Joannah Tagaroma has yet to take her first step. She actually can’t even stand on her own.

But her mother Annabelle is not losing hope that the toddler will walk like any other child and overcome the limitations attributed to cerebral palsy, whose symptoms Joannah started showing when she was just three months old.

Cerebral palsy generally refers to a range of disorders affecting a person’s movement, muscle tone, balance and posture. It is caused by a damage to the developing brain either during pregnancy or shortly after birth.

When Joannah needs to sit up, mom must still hold and prop up the girl’s body or she would fall over and hit the floor headfirst. “That has been our life,” she said when the Inquirer saw mother and child at the recent Golden Heart Manila symposium, which sought to help parents like Annabelle.

Organized by the Junior Chamber International-Manila chapter, the symposium held at Manila Ocean Park hoped to educate the families and caregivers of children with cerebral palsy, particularly about the proper therapy.

Annabelle, a mother of three who makes and sells rice cakes in front of her house in Barangay Concepcion Dos, Marikina City, recalled feeling a “mix of sadness, fear and pity” when Joannah was diagnosed with the condition at Quirino Memorial Medical Center in 2012.

But a fortunate encounter made her realize that Joannah’s life need not be caged in immobility. Shortly after the diagnosis, Annabelle came across a group of doctors sent by the Marikina government on a medical mission in her neighborhood.

The doctors made her understand that cerebral palsy could actually be managed with therapy. Since then, she has been attending seminars organized by the government and private institutions to better understand the disability and help her daughter.

Today, with some financial assistance from the city government, Annabelle takes Joannah to a clinic in Pasig City for twice-a-week therapy sessions costing P400 each. Based on the child’s progress, the attending neurologist is optimistic she could walk by the age of seven, Annabelle said.

“I think Joannah has come a long way because I talked to the right people and was informed about cerebral palsy. I’m very thankful for that,” Annabelle said.

Among those people was Dr. Alexis Reyes, associate professor at the University of the Philippines-Manila Department of Pediatrics, one of the speakers at the Golden Heart Manila symposium.

According to Reyes, Filipinos in general still have “very poor recognition and awareness” of cerebral palsy. “They have a child who moves slowly, and they say ‘Ah, he’s just slow. He’ll soon catch up,’ ” she said in an interview.

They usually wait for symptoms of a serious illness to appear before taking the child to the hospital, she added. Others mistake cerebral palsy for other conditions, like autism, again due to lack of information, Reyes noted.

Even supposed experts can make inaccurate findings, hence it is not uncommon for a family who consults two or more therapists to hear different opinions or diagnoses. “Like all existing programs or problems in the disability sector, there is still a lack of education among those who are [dealing with cerebral palsy], maybe even among the doctors and other health professionals.” 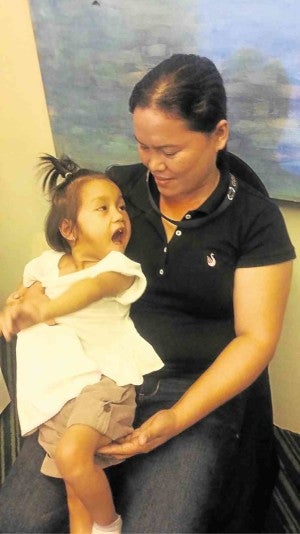 For Reyes, the government can do much more to empower affected families. A good start is for city or municipal health officers to be more proactive and seek out cerebral palsy sufferers in the community.

“Information dissemination about cerebral palsy should be strengthened. Teach [local health workers] about surveillance and monitoring. They are so hungry for knowledge,” she said.

Medical professionals, on the other hand, should find “one level of awareness where they can meet” to better empower families. For this approach, Reyes cited the “medical home” concept applied in the United Kingdom, wherein physical therapists, occupational therapists, speech therapists and the family doctor meet and decide “as one team” on the best course of treatment.

“Collaboration has to be very close,’’ she said. “I’m not going to double as a therapist [since I’m in pediatrics]. I’m going to see what your plans are, so let’s put it together. And we can set goals, realistic, achievable goals.”

According to Reyes, once the specialists are “on the same page, with the same knowledge basis,” they will be able to appreciate their role and explain the condition to the family in simpler terms.

For indigent parents who wish to have their children checked for cerebral palsy, the developmental clinic of the Philippine General Hospital’s (PGH) outpatient department can have them diagnosed free of charge, she said.

The patient may then be referred to the UP College of Allied Medical Professions or the PGH Department of Rehabilitation Medicine, where he or she can undergo therapy for a minimal charge, Reyes added.