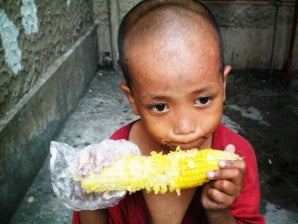 Results of the survey conducted on September 4-7 and first published in BusinessWorld showed that about one in every five households (21.5 percent), or an estimated 4.3 million families, went hungry in the third quarter compared to 15.1 percent in the previous quarter.

Based on the SWS data, the hunger statistic is the worst so far in the Aquino administration but it is still below the record 24 percent in December 2009 during the previous Arroyo administration. It is also 7.5 percentage points higher than the 14 percent average from 1998 to 2011.

SWS asked 1,200 respondents nationwide: “In the last three months, did it happen even once that your family experienced hunger and did not have anything to eat?”

Those who answered in the affirmative were further asked: “Did it happen ‘only once,’ ‘a few times,’ ‘often’ or ‘always?’”

SWS classified experiencing hunger “only once” or “a few times” as “moderate hunger,” while going hungry “often” or “always” was rated as “severe hunger.”

By geographical area, overall hunger in Luzon outside Metro Manila rose by 18.6 percentage points to 28.3 percent (2.5 million families) from the previous 9.7 percent.

In Mindanao, moderate hunger fell 9 percentage points to 11 percent from the previous quarter’s 20 percent.  It also saw a 5.3-percentage-point decline in the Visayas from 18.3 percent to 13 percent.

Meanwhile, severe hunger was highest in Metro Manila, rising by 4.6 points to 6.3 percent from 1.7 percent.

In the Visayas, severe hunger went down to 2.3 percent from 2.7 percent in June.

The survey used face-to-face interviews and had a margin of error of plus or minus 3 percentage points. Inquirer Research