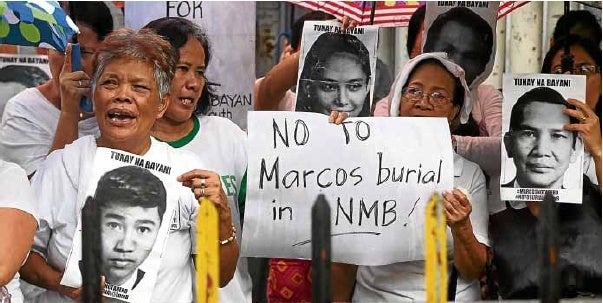 Days before the Supreme Court issues a ruling on the planned hero’s burial for the late strongman Ferdinand Marcos, hundreds of protesters trooped to Padre Faura St. in Manila to make a “last plea” for the justices to vote against his interment at Libingan ng mga Bayani.

Members of the Duyan ng Magiting Coalition called on the 15 Supreme Court justices to “consider (their) urgent appeal,” and junk calls by some sectors for the dictator to be buried at the final resting place for heroes in Taguig City.

“This is important to us because it is the truth. If we say he is a hero, what are we telling our children? That history can be revised by people in power. That money can buy being a hero,” said Susan Quimpo, whose siblings were arrested, tortured and killed during martial law.

Quimpo is a member of the Martial Law Chronicles Project, which is part of the Duyan ng Magiting Coalition.

Other members of the coalition include the Akbayan Youth, Claimants 1081, Ateneo de Manila University Sanggunian and College of St. Benilde Center for Social Action.

In a statement, the group reiterated that Marcos was a “dictator, thief and a violator of human rights” based on several Supreme Court decisions and laws, and should therefore not be accorded a burial befitting a hero.

It cited Republic Act No. 10368, passed in 2013, which provides for the “reparation, both monetary and nonmonetary to the victims of human rights violations during the Marcos regime.”

Hilda Narciso, who was raped by soldiers during martial law, said a US court where she and several others lodged a complaint, also found Marcos guilty of human rights violations.

“How can you say that he is a hero? The family should not ask for his burial at Libingan ng mga Bayani. He has no right [to be] there,” Narciso said.

The members of the group also submitted a letter containing their grievances to each of the justices.