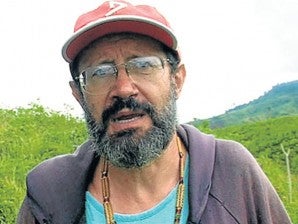 Uncertainty over whom to trust has made it difficult for persons close to Fr. Fausto Tentorio to cooperate in the inquiry into his murder.

This problem was aired Thursday by Justice Undersecretary Francisco Baraan, chairman of a special task force on extralegal killings. But he expressed hope that another trip to Tentorio’s parish in Arakan, North Cotabato province, would result in a free disclosure of information from the Italian missionary’s colleagues and friends.

Lieutenant Colonel Leopoldo Galon, spokesperson of the Eastern Mindanao Command (EastMincom) admitted that authorities had labeled Tentorio as “friendly” to the New People’s Army (NPA), the armed wing of the Communist Party of the Philippines (CPP).

According to Baraan, cooperation from Tentorio’s colleagues became a problem when the military got involved in the investigation. “That was probably one of the reasons they withheld other information,” he said.

Baraan said he and a team from the National Bureau of Investigation would make the trip next week. He said he first traveled to Arakan to conduct an inquiry shortly after Tentorio was shot dead by a lone assassin, but the priest’s colleagues said they would wait until after the interment.

“I talked with Fr. Giovanni (Vettorello, assistant parish priest) and he was very happy to learn that the DOJ (Department of Justice) had sent a team,” Baraan said Thursday in a press conference.

Sketch of a visitor

“There is some apprehension [among those close to Tentorio],” he said. “We are looking at getting their cooperation, and I think they are waiting for us to get the details of what they know.”

Tentorio, lovingly called “Father Pops” by those who knew him, lived and worked among the Manobo tribe in Arakan Valley for decades.

He was gunned down on October 17 as he prepared to drive to Kidapawan City to attend a clergy meeting. An estimated 10,000 people attended his burial in Kidapawan on October 25.

Baraan said the task force had obtained a sketch of one of several persons who visited Tentorio at the Our Lady of Perpetual Help convent shortly before the fatal shooting.

“We have a sketch of somebody who visited Father Tentorio before he was gunned down. We will confirm it from witnesses if it is the same person they saw,” he said, adding that the sketch had yet to be cleared for release to the public.

Baraan clarified that the person on the sketch was “not necessarily a suspect.”

“We have not yet settled on a specific theory as to who was responsible and why Tentorio was killed. And we have not ruled out any theories,” he said.

Church workers in Arakan had said that days before Tentorio was killed, they saw unidentified men believed to be soldiers near the convent.

They said one man entered the convent and inquired where Tentorio was.

The military has repeatedly denied involvement in the killing.

“We also received information that there were times he aided some of the rebels,” Galon said. “But even that is justifiable because a priest will help those in distress. Even the Red Cross does that.”

Galon said the military was able to confirm Tentorio’s ties with the NPA when the priest’s phone number was found among the contacts listed in the mobile phone of a suspected communist guerrilla who was arrested recently.

But he said the military did not believe that Tentorio was active in the communist underground, as supposedly implied in the full-page ad put out in the Inquirer and several local papers in Davao City on Wednesday.

“How can religion and communism mix?” Galon said.

According to the ad, put out by a group calling itself the Southern Mindanao Regional Party Committee of the CPP and signed by one Siegfred M. Red, the purported committee secretary, Tentorio was “a communist, an internationalist, who devoted more than half of his life to serve the interest of the poor Filipino masses and make the cause of the Filipino people his own.”

Bishop Modesto Villasanta, a leader of the interfaith group Exodus for Justice and Peace, said he saw nothing wrong in the claim that Tentorio was a communist.

“If they found in Father Pops the standard of an ideal communist, so be it,” Villasanta said. “Maybe the CPP appreciates the character of Father Pops, making him worthy to be called a communist and an internationalist.”

Villasanta said, however, that only the CPP could confirm whether Tentorio was indeed an active party member. He said he himself did not believe that the ad should be taken as an admission of Tentorio’s involvement in the communist underground.

The issue, according to the bishop, is not whether Tentorio was a communist but whether he lived his life in the service of the people.

The ad also said the military was responsible for Tentorio’s death because he had actively opposed “Oplan Bayanihan,” the government’s new counterinsurgency tactic.  (The Armed Forces has described the new tactic as putting more weight on development rather on military operations as a solution to the communist rebellion.)

But Galon said the ad was part of the communist guerrillas’ “low life tactic” to pin the blame for Tentorio’s death on the military.

“Labeling Father Tentorio as a communist is a deceptive attempt to insinuate that the military is behind his murder,” Galon said. adding:

“Who will benefit from his death? Not us.”

Galon also said Tentorio was known to support scholars whom the military did not want displaced from school “because they would be vulnerable to recruitment” by the NPA.