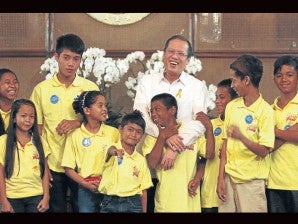 CHILD-FRIENDLY President Aquino wraps his arms around one of the rescued street children during the awarding ceremonies for the 2011 Presidential Awards for Child Friendly Municipalities and Cities. EDWIN BACASMAS

Let’s just say he put on a different game face.

President Benigno Aquino III on Thursday joked about a subject which only recently irritated him—his supposed penchant for video games.

Speaking at a gathering of youth leaders in Malacañang, the bachelor President noted that people tend to have a sweeping notion of today’s youth as nothing more than gaming fanatics who spend their entire day at Internet shops, addicted to things like “DOTA.”

“Either that, or they are always busy updating their Facebook,” he said in Filipino.

But as the audience snickered, he explained: “I am just checking if you understand DOTA, and it looks like not all of you do.”

“I’m just reading it here,” he said, referring to his prepared speech.

And now that he had mentioned DOTA, the President said, his critics might again take it as a sign “that I play video games all the time.”

DOTA actually stands for “Defense of the Ancients,” a combat-oriented game of strategy, where players can form online teams and field their respective “heroes” to carry out a mission.

Mr. Aquino made the remarks at the awarding ceremony for this year’s Ten Accomplished Youth Organizations (Tayo).

Earlier this month, the President visibly took offense during a forum hosted by the Foreign Correspondents Association of the Philippines, when a journalist asked him pointblank whether the “rumors” were true that he was playing video games at the height of the Aug. 23, 2010, hostage crisis at Rizal Park.

The President flatly denied the rumors and said it actually hurt him to have to answer such a question concerning something that never happened.

In praise of the awardees, Mr. Aquino couched his message using another popular youth term.

“These are groups that are aware that ‘planking’ is not the solution to the lack of food in the country,” he said, referring to a recent fad.

Planking refers to a “game” wherein people would have themselves photographed while lying stiff (like a wooden plank) on their backs or face down at odd locations or famous landmarks. The photos then get posted on social networking sites, like snapshots of a performance.

Of late, militant youth organizations critical of the Aquino administration have included planking before media cameras as part of their street demonstrations.

Special awards were given to the Association of Locally Empowered Youth in Northern Mindanao (Lenovo’s Most Innovative Project Award), and to Kairo Band (Coke Barkada Award).

Read Next
Areas of temporary stay like MOA-AD, Escudero fumes
EDITORS' PICK
OVP: Pilot’s claim vs Robredo ‘never happened’, a ‘malicious fabrication’
Honolulu Café is the cure for your Egg Tarts and Roastings cravings
Petition to reverse Comelec decision on Bongbong Marcos’ DQ case reaches SC
PH detects local transmission of Omicron subvariant BA.2.12.1
House energy committee chair Arroyo bats for cheap electricity
Luxe property: A way to build, preserve wealth
MOST READ
Congress canvassing of votes for president, VP to begin May 24
Heart Evangelista gets a ‘no’ from Chiz Escudero after asking, ‘Do I deserve a bag?’
Man posing as Marcos spox revealed to be an inmate in Bilibid — Guevarra
Closure order vs Megaworld Corp halted as firm vows cooperation with BIR – exec
Don't miss out on the latest news and information.