Comelec, Smartmatic cleared of tampering with May poll servers 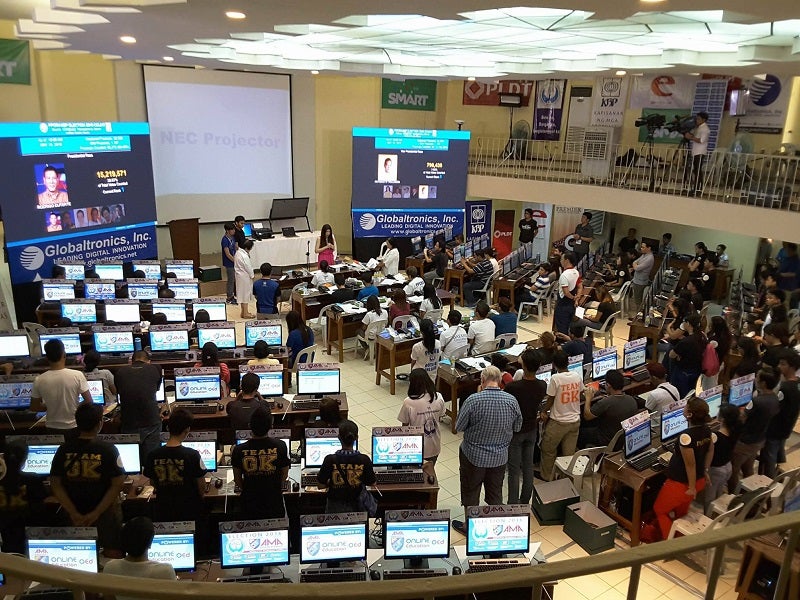 The command center of the Parish Pastoral Council for Responsible Voting for the May 9, 2016, national elections. (RADYO INQUIRER FILE PHOTO/ ISA UMALI)

MANILA — The Manila Prosecutors Office has dismissed a complaint filed by the campaign adviser of defeated vice presidential candidate Ferdinand “Bongbong” Marcos Jr., accusing the Commission on
Elections and the Smartmatic company of tampering with the May 9 election server to rig the results of the election in the vice presidential race.

The prosecutors set aside the complaint alleging violations of the Cybercrime Prevention Act against Smartmatic and Comelec officials and employees in connection with their alleged tampering with the transparency server that supposedly compromised the integrity and credibility of the May 2016 elections.

Jonathan Dela Cruz in his capacity as the first nominee of the ABAKADA partylist during the May 9 elections, filed the complaint, on May 24, alleging violations of Section 4a1, Section 4a3, and Section 4a4 of the Cybercrime Prevention Act. Respectively, these provisions refer to the criminal acts such as the accessing of a computer system without right; the intentional or reckless altering of computer data without right; and the intentional altering or reckless hindering, interfering with the functioning of a computer and computer network’ by inputing, deleting, and altering computer data and program without right or authority.”

Dela Cruz was the campaign adviser of Bongbong Marcos, who has filed an electoral protest with the Presidential Electoral Tribunal questioning Vice President Leni Robredo’s victory.

According to Macapagal, Pacquing and Quiming-Baguio — whose Sept. 28 resolution was also approved by city prosecutor Edward Togonon — in the first instance, based on records, it was “only” Garcia who made the “questioned change” in the script of the transparency server at the Parish Pastoral Council for Responsible Voting.

The other Smartmatic respondents, they said, were either “merely present in the premises of the PPCRV at the time the change was made,” or as in the case of Moreno who was assigned in Quezon City at that time, was “merely informed about it.”

“On the assumption that said change in the script is criminal, Garcia’s co-respondents can hardly be considered as his co-conspirators,” they said.

Quoting People vs Leaño, conspiracy, after all, they said, “transcends mere companionship, and mere presence at the scene of the crime does not in itself amount to conspiracy.”

“Of course respondent (Baniqued) admits to having been informed by respondent Peñalba…and consulted by respondent Garcia on the matter but there is no clear evidence showing that he decided along with Garcia to go ahead and make the change in the script,” they said.

As for Peñalba, they said he “merely relayed” to Baniqued and Garcia the report by a Rappler information technology representative about the presence of the character “?” in the names of certain candidates in the transparency server.

Quoting the People vs Natividad, they said “even knowledge, acquiescence in or agreement to cooperate is not enough to constitute one as a party to a conspiracy, absent any active participation in the commission of the crime with a view to the furtherance of the common design and purpose.”

Therefore, they said “Peñalba’s failure to stop Garcia from doing what he did, without proof that he gave him any go ahead signal is not enough indication of conspiracy.”

“He must have performed an overt act in … furtherance of the complicity. The overt acts of the accused may consist of active participation in the actual commission of the crime itself, or may consist of moral assistance to his co-conspirators by moving them to execute or implement the criminal plan,” they said.

They said apart from Peñalba, the other Comelec personnel did no such things to implement the change in the script of the transparency server.

As for the contention that Garcia’s changing of the script from “?” to “ñ” was criminal because it was done without right or authority by the Comelec, which should be sitting en banc when giving it, the panel said Dela Cruz “failed to show convincing proof that only the Comelec en banc may give such authority” in the first place.

The panel said the “only evidence” presented by the complainant were the separate statements given to the media by Comelec Commissioners Rowena Guanzon, who said that Smartmatic should have secured permission from the Comelec en banc before making the change, and Christian Robert Lim, who also deplored the fact that they were not informed of the situation before the change was made.

“This evidence is flawed for the following reasons: First, it is hearsay, being (a) mere news report,” they said, noting that this did not mean that they doubted the probity of the two officials but that they were “not unaware that there are times when news are cut and slanted for media mileage and commercial purposes.”

The panel said secondly, since the two commissioners were not presented as witnesses, they (the panel) were “deprived of such opportunity to ask vital clarificatory questions regarding their statements such as the ground on which they base (these), whether such ground is based on their understanding of the Protocol of Escalation or some other valid considerations.”

“Third, these reported statements were the personal opinions of only two commissioners out of seven that comprise the Comelec en banc,” the panel said.

“In view of the aforestated reasons, we believe that the aforestated evidence falls very much short of the quantum required to constitute probable cause for the crime charged. We cannot hang our resolution on such a flimsy thread,” the panel concluded.

The panel said that for data and system interference to be criminal, they should “either be intentional or reckless.”

In criminal law, they said the “word intentional connotes an act done with malice.”

“Viewed in this light, respondent Garcia’s act of replacing “?” with “ñ” in the script of the transparency server could hardly be called criminal. His intention was only to correct an abnormality in the spelling of the names of certain candidates as clearly borne out of the sequence of events narrated in the report dated May 11, 2016 by William Yu, PPCRV IT director, the memorandum also dated May 11, 2016 of respondent Peñalba to (Lim), and the letter dated May 12, 2016 submitted by respondent (Moreno) to the Comelec,”
the panel said.

The panel added Garcia’s act was also not reckless. The panel reasoned that when he made the correction,”he studied the error to determine whether the sense is correctible without damaging the computer system or affecting the election process ”

They said he “even consulted with respondent Baniqued on the matter before proceeding to correct the error.”

“Moreover, as has heretofore been discussed, Garcia’s action did not in anyway result (in) any damage whatsoever,” they said.

The panel also dismissed Dela Cruz’s contention that the act of “tweaking the script of the transparency server caused widespread anxiety and concern amongst (sic) the nation,” saying that “no evidence” was presented in support of such.  SFM