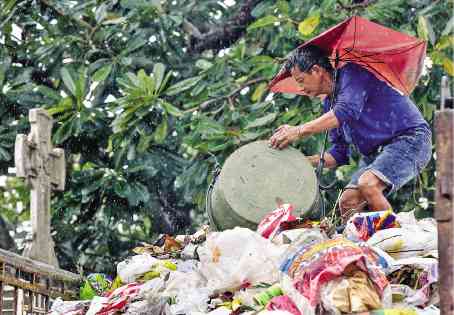 Comes now the hardest part: The collection of trash left behind by the living after visiting their dead at the Manila North Cemetery. —LYN RILLON

Change has yet to happen among cemetery goers as an environmental watch group noted the continuing proliferation of the “throw-away culture” during this year’s observance of All Saints’ Day.

“The culture of throwing discards wherever and whenever it is convenient again spoiled our time-honored tradition of remembering our departed relatives,” said Aileen Lucero, EcoWaste Coalition national coordinator.

“Many people still litter, rain or shine. The repeated reminders from government, church, political and environmental leaders were no match for these hardened litterbugs,” Lucero added.

As of Wednesday, the Metropolitan Manila Development Authority said it had collected 168 truckloads of garbage or around 1,008 tons from 23 cemeteries in Metro Manila.

While the volume was more than half of the 302 truckloads collected in 2015 from 26 cemeteries, the figure was still expected to go up since the cleanup operations would continue until Saturday, said Francis Martinez, head of the MMDA Metro Parkway Clearing Group.

He added that they have also yet to get reports from three more cemeteries in the cities of Muntinlupa, Malabon and Las Piñas.

According to Martinez, of the 23 cemeteries they have cleared, Manila North Cemetery had the biggest amount of trash at 35 truckloads. Next was Manila South Cemetery (28 truckloads) and La Loma Public Cemetery (18 truckloads).

Bagbag Cemetery, in particular, was identified by the group as the “most trashed” with mounds of garbage propped up against tombs, sometimes right next to visitors in the crowded cemetery.

“It was the most pitiful sight we have seen during our ‘Undas’ trash monitoring this year,” Lucero said.

The group has e-mailed photos of the trashed cemetery to the Office of Quezon City Mayor Herbert Bautista with an appeal to officials to enforce a better ecological waste management system next year.

It also commended local authorities, cemetery administrators, the MMDA and civilian volunteers such as those from Tzu Chi Foundation and other civic groups for deploying street cleaners and garbage collectors, and collecting recyclable materials. —WITH A REPORT FROM JOVIC YEE