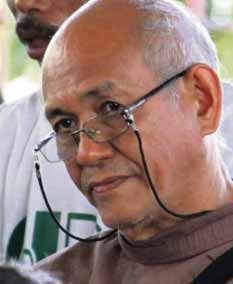 LUCENA CITY—An environmentalist group has asked the government to tap modern technology and water conservation programs to avert the impending water crisis in Metro Manila, instead of pushing dam projects in Sierra Madre.

Fr. Pete Montallana, president of Save Sierra Madre Network Alliance (SSMNA), said his group would continue to oppose all dam projects in Sierra Madre, as water concessionaires in Metro Manila were looking for alternative sources to augment the water supply from Angat Dam in Bulacan province.

Montallana, a Franciscan, said building dams in the northern section of Quezon province covering Sierra Madre was not the solution to the looming water shortage in the capital.

“There are modern technologies available to avert the water crisis without destroying Sierra Madre and consequently wiping out its natural inhabitants, the indigenous Agta tribe,” he said.

He cited as a model the Singapore water system in which technology was in place to collect, reuse and desalinate water.

He also urged the government to adopt a sincere water conservation program and stop forest degradation to increase underground supply.

Officials of Maynilad Water Services Inc. said Metro Manila would confront a water crisis unless the government found a source to supplement the Umiray-Angat-Ipo or Angat reservoir system, which will not be able to meet the needs of its more than 15 million inhabitants four years from now.

Despite the looming crisis, the Metropolitan Waterworks and Sewerage System (MWSS) has yet to start construction of Kaliwa Dam in General Nakar. The project was supposed to start in 2015 and completed in 2020.

The MWSS has been pushing for the construction of the P18.7-billion New Centennial Water Source dam project in Sierra Madre’s Kaliwa River.

The proposed dam would submerge the mountain village of Pagsangahan in General Nakar, flood a watershed area of 9,700 hectares and displace 1,465 families, SSMNA studies showed.

Suarez, who represents the third congressional district of Quezon, was referring to a dam project in Sierra Madre’s Kanan River in General Nakar town.

The Ewil chair and chief executive, Stewart Elliott, disclosed the plans at a public consultation called by the Quezon provincial board.

The proposed project was met with alarm by indigenous peoples in Sierra Madre.

“If we allow the project [to proceed], it would lead to the death of our tribe,” Ramcy Astoveza, Agta tribe chieftain, said earlier.

“They have to consult and seek approval of the local and provincial governments, our community, especially our indigenous peoples in the Sierra Madre,” said Rozul, now the town’s municipal administrator.

At the House of Representatives, Bayan Muna Rep. Carlos Isagani Zarate, chair of the committee on natural resources, has raised doubts about an impending water shortage, noting that the threat had been aired during the Marcos regime.

Zarate nevertheless said he was taking no chances and agreed to call for a probe of Maynilad’s warning.

“As it is, this is very alarming. We may consider an immediate investigation of this issue so that all stakeholders will be heard,” said Zarate.

In Manila, Socioeconomic Planning Secretary Ernesto Pernia said the previous administration should have put the project in motion before the end of its term considering that then President Benigno Aquino III himself warned of the water crisis in his State of the Nation Address in 2013.

“We’re looking at the proponents’ proposals to deal with the situation. The previous administration should have addressed it as a matter of urgency,” Pernia said in a text message.

But he said there was still time to prepare for the shortage or mitigate the crisis.

“It’s never too late. Otherwise in the short run we’ll be dead rather than John Maynard Keynes’ ‘in the long run we’ll all be dead,’” Pernia said. —WITH A REPORT FROM GIL C. CABACUNGAN