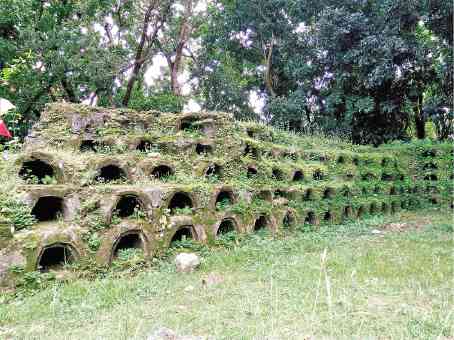 The Ermita Ruins is an alternative destination in Bohol province. —LEO UDTOHAN

DIMIAO, Bohol—There was something that intrigued balikbayan Helen Castaño in this town that prompted her to include it in her places to visit on the island province of Bohol.

On Friday, Castaño went to the Ermita Ruins, a wall of tombs arranged like a honeycomb behind the San Nicolas de Tolentino parish church.

The tombs were built between 1800 and 1815 but were never used. Still, these were enough to attract attention of tourists, including Castaño, who felt something eerie when walking around the 1,000-square-meter area where the tombs are located.

She said Ermita Ruins, even for its strange attraction, made her appreciate Bohol’s rich past.

Ermita is Spanish for a chapel or hermitage, Reyes said. She said it was used as a military fortress, a chapel and a burial site.

He said the area was a cemetery during the Spanish period. In 1998, the National Museum uncovered graves of early Christians within the vicinity.

A chapel used to stand at the center of the ruins. On a mound in front of the chapel was where the krus dako (big wooden cross) was displayed.

Luspo said during the Spanish period, people were not allowed to hold wakes in their houses so they took their dead to Ermita instead.

At least 700 empty tombs are found in the ruins. These are distinguished by their semicircular shape and measures at least 50.8 centimeters (20 inches) long.

Researchers were surprised they did not find any remains in the small niches but bones were excavated from the ground, not properly arranged but just laid on top of each other suggesting there was a mass burial.

Luspo said the presence of bones suggested that the place was a functioning cemetery. He said there were no bones inside the honeycomb tombs because these were considered “secondary” burial sites.

“[The area] has provisions for an ossuary or bone niches, which could be a carryover from the ancient Boholano practice of secondary burial,” he said.

Reyes said bones found during excavation were transferred to the municipal cemetery.

Reyes said every Nov. 1, a Mass is held inside Ermita Ruins for the souls of those buried there.

The San Nicolas de Tolentino Church Complex, including Ermita Ruins, was declared a National Cultural Treasure by the National Museum on July 30, 2011.