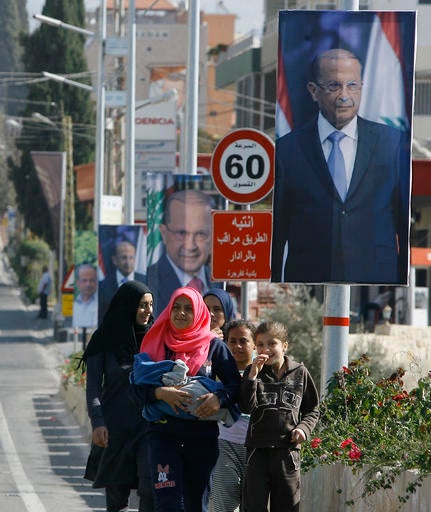 People walk past posters of Christian leader Michel Aoun in the southern port city of Sidon, Lebanon, Sunday, Oct. 30, 2016. Aoun, an 81-year-old veteran politician, is set to be elected by Parliament on Monday as part of a political deal that’s expected to be another boost for President Bashar Assad in neighboring Syria. (AP Photo/Mohammed Zaatari)

BEIRUT — Lebanon’s parliament has elected Michel Aoun, a former army commander and strong ally of Hezbollah, as president, ending a more than two-year vacuum in the country’s top post.

Aoun secured a simple majority of votes in the house after a chaotic session that saw several rounds of voting because extra ballots appeared in the ballot box each time. He garnered 83 votes out of 127 lawmakers present at the session.

He also failed to get elected by a two thirds majority in the first round, as had been widely expected.

Aoun’s election is seen by many as a clear victory for the pro-Iranian axis in the Middle East, giving a boost to Hezbollah and the Shiite Lebanese group’s ally, Syrian President Bashar Assad. TVJ