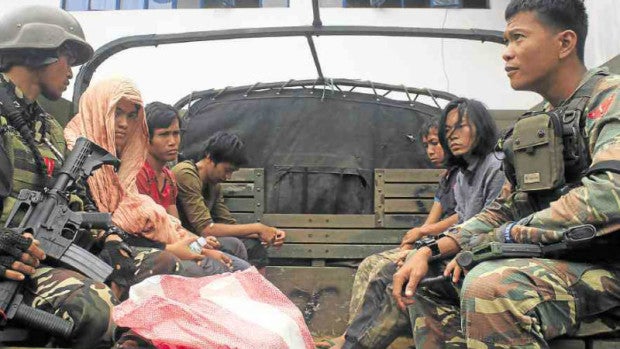 Government soldiers guard members of the Maute extremist group on a military truck bound for the Lanao del Sur provincial jail in Marawi City. They were arrested at a military checkpoint on Aug. 22, but they were freed by their comrades in a daring jailbreak on Saturday. AFP FILE PHOTO

The Philippine Army has uncovered a plot by the local terrorist Maute Group to bomb either Davao City or Maguindanao based on the testimonies of four members responsible for the Sept. 2 Davao night market bombing that killed 14 people and injured 70 others.

Col. Benjamin Hao, Army spokesperson, said in an interview that the plot was revealed during the interrogation of four members of the Dawla Islamiya Fi Cotabato–Maute Group who were earlier arrested by Army soldiers in Cotabato City.

The four were identified as Mohammad Lalaog Chenikandiyil also known as Datu Boi; Jackson Mangulamas Usi aka Abu Mansor/Jam; Zack Villanueva Lopez aka Haron, and Ansan Abdulla Mamasapano aka Abu Hamsa have been turned over to the Philippine National Police.

They were arrested on the strength of the search warrant, for violation of Republic Act No. 10591 (Comprehensive Law on Firearms and Ammunition), issued by Judge Banzawan Ibrahim of the Cotabato Regional Trial Court.

As to the possibility that the plot could be carried out, Hao said: “Everything is possible because this is a terrorist group. Just the same our job is to make sure to stop them from their plans.”

Hao said the group had bombed Davao City as a diversionary tactic and in retaliation for the massive military operations launched against the Abu Sayyaf Group (ASG) and other local terrorist groups in Sulu and Basilan.

He stressed though that both the Army and the PNP were still working on evidence that would prove the plot to be true.

Based on the Army’s assessment and intelligence reports, Hao said the plot, if implemented, would target any place in Mindanao although Davao City and Maguindanao were mentioned in the interrogation report.

Meanwhile, another ASG member was killed in an early morning encounter between soldiers and members of the bandit group in Indanan, Sulu, on Sunday.

This brings to 37 the total number of ASG members killed since the intensified combat operations was launched in July while scores were also wounded on the ASG aside. On the other hand, 15 soldiers were killed and 28 were wounded during the same period.

Troops from the 11th Scout Ranger Company, acting on a report from local residents, immediately sent a patrol and engaged the bandit group of about eight men in a brief firefight before the ASG scampered away.