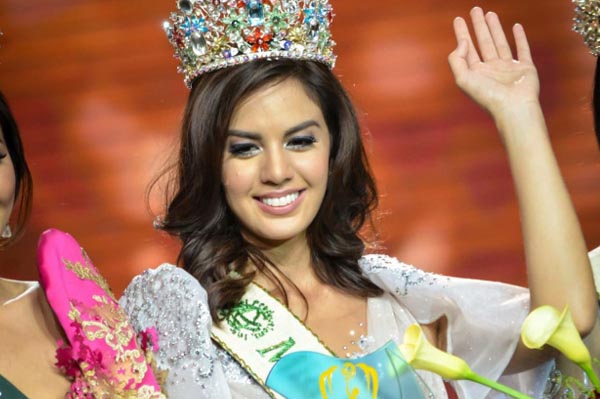 “My mom is pulling me out from this mess people are getting me into. I did it myself, but it’s sad that people are doing this to me. And they are the ones calling me crazy,” Schweighart told the Philippine Daily Inquirer in a phone interview after meeting with pageant organizer Carousel Productions in the group’s headquarters in Mandaluyong City on Monday afternoon.

“Imelda came with her mother, from New Zealand, to pull her out because of the controversy. She could not take what was being done to her daughter and will bring her to New Zealand,” Schuck shared.

Schweighart, who missed the Top 16 in the ceremonies held at the SM Mall of Asia Arena in Pasay City on Saturday night, said it all started with a gown.

The statement she gave in the controversial video, she said, were made “in the heat of the moment” brought about by the anger she felt upon learning that her competition gown was taken out of her dressing room and given to Espin to wear for the evening gown competition.

Shortly after the announcement of the Top 16, Schweighart shared on her Facebook account a video of her fitting the yellow number with designer Leo Almodal.

“It was my gown. He made it for me. He wrote on the sketch that it was ‘for Imelda Schweighart’ and it was patterned after Artemis,” Schweighart explained.

“I just discovered that it wasn’t there anymore. My fellow candidates were asking ‘where are they taking your gown?’ and were wondering what I would wear for the rest of the pageant,” she added.

“Leo’s staff took the gown. He just messaged me after I posted the gown on Facebook that he will make me wear another gown,” she continued.

She opted for a simple gown from Nelson’s wardrobe which “still had a tag on. She brought it with her from Guam.”

Schweighart said her fellow candidates hugged her and helped her in the dressing room with Nelson’s dress. “They were even crying for me, saying ‘she [Espin] is wearing your gown.’ I wasn’t even crying anymore,” she said.

Schweighart maintained that it was not her intention to insult the Ecuadorian beauty.

“I just went out to see my mom and brother, talking to my fans from Facebook waiting outside. I was super comfortable. Whatever I said in the past, I’m sorry. I was not thinking, it was in the heat of the moment, I was just speaking my mind,” she told the Inquirer.

“I was feeling bad, after the tension in the dressing room. I was carrying a heart that was offended, so I said all those things,” Schweighart continued.

“She [Ecuador] was my roommate and I don’t want to make her feel bad. I hope she would be okay about it. Only her, only Miss Ecuador can answer, deny it or tell the truth,” she added.

But the Filipino beauty said she stood by her position about having a Miss Earth winner who has undergone invasive cosmetic enhancements.

“You’re not gonna set a good example to young women If you would undergo surgery just to win. I don’t want to send that signal,” she declared.

But Schweighart also said that she “felt violated” because she was not made aware that she was being recorded when she spoke with her fans.

Schuck said she found the incident “sad” because “I love her. I love all of these girls. But I also heard her explanation on CNN. She was angry at what happened. There were some things that led to this,” she said.

Espin bested 82 other aspirants for the crown, truncating Schweighart’s bid to secure a “three-peat” for the Philippines after the country’s historic back-to-back victories in 2014 and 2015 courtesy of Jamie Herrell and Angelia Ong, respectively.

Schweighart is only the third Filipino beauty to miss the semifinals in the Philippine-born international pageant. 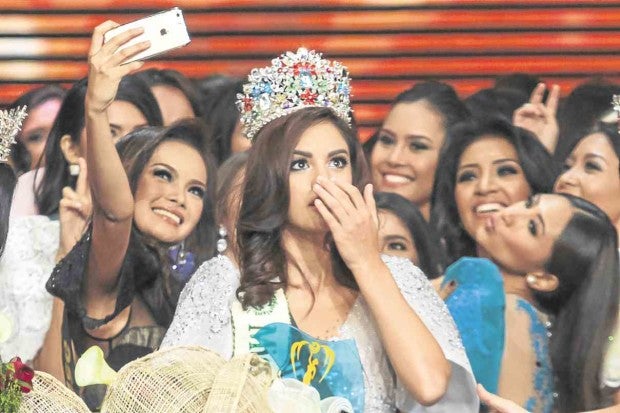 This was not the first incident where Schweighart had dealt with a pageant loss.

She joined the 50th edition of the Binibining Pilipinas pageant where she only finished in the semifinals, bowing out to one of the tilt’s strongest batches of winners which produced 2013 Miss International Bea Rose Santiago, 2013 Miss Supranational Mutya Johanna Datul, 2013 Miss Universe third runner up Ariela Arida, and with Pia Wurtzbach as the lone runner up then. Wurtzbach eventually won the Binibining Pilipinas Universe crown and the 2015 Miss Universe crown.

In 2015, she joined the Mutya ng Palawan pageant where she finished second.

In an earlier interview for her national tilt, Schweighart explained to the Inquirer that she lost the provincial crown because the local pageant organizers could not handle “a beauty queen who speaks her mind,” who has the courage “to point out what is wrong with the province.”

This was also not the first time that Schweighart found herself embroiled in a controversy.

In a Facebook Live video posted earlier during the international competition, she caught Austria’s Kimberly Budinski off guard by asking where the Nazi strongman Adolf Hitler was originally born. And when the seemingly uncomfortable Austrian charmer responded that it was Austria, the Filipino queen proceeded to say: “Our president is doing Hitler stuff!”

After drawing flak for her social media post, Schweighart later explained that she just wanted to clarify that the former dictator originated from Austria, and not Germany as many believe.

“I’m half German and my classmates always teased me ‘Hitler! Hitler!’ in school. I just want to point out the truth,” the beauty queen said in an earlier interview.

She also clarified that she did not mean to cast President Duterte in a bad light, and cited the leader’s political fervor as the parallelism with Hitler where her comparison was based.

Schweighart ignited even more detractors when, in another interview, she likened herself to Albert Einstein, saying she possessed the same characteristics that the brilliant scientist had.

She later brushed off the criticisms and said she would just focus on her advocacy of banning genetically modified seeds from the country’s farmlands.

“Negative people have nothing to do but bash. I and Carousel are devastated that these people focus on nonsense instead of the more important aspect of the competition, which is the advocacy,” Schweighart said.

And even after rescinding her national title, Schweighart said her passion for saving the environment would continue.

“My advocacy will live on forever. That advocacy of mine is very crucial, it’s an activists’ platform. I want GMO banned in the Philippines. Thirty-eight countries have banned it. We should do it too,” she added.

Schweighart said she would take the time off, away from the limelight, to travel with her mother and keep herself safe.

“I’ve been receiving threats, some are really below the belt that I cannot tell you. I’ve been getting messages on social media, and my friends have been informing me too,” she revealed.

But Schweighart also said that “I am more at ease now.”

“We haven’t spoken to her about this yet. But she should be the one who should inherit the title,” Schuck added.

The Miss Earth and Miss Philippines-Earth winners are expected to work on projects that help protect the environment.  SFM