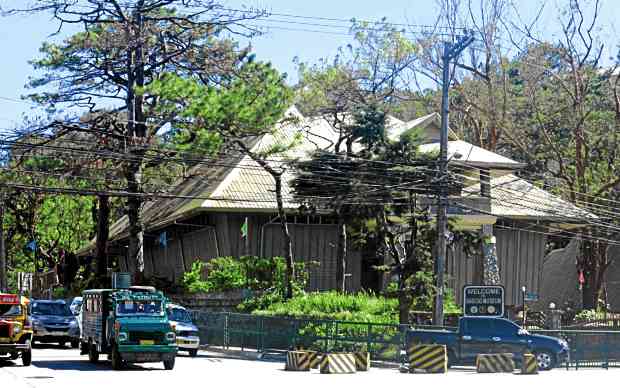 The Baguio Museum on Governor Pack Road in Baguio City houses important artifacts of the Cordillera region and its people. —EV ESPIRITU

BAGUIO CITY—A civic group operating the Baguio Museum fears a takeover by the national government and has asked the city government for its protection.

In an Oct. 27 letter, the board of trustees of the Baguio Museum Inc. asked Mayor Mauricio Domogan to help delineate the 1,500-square meter lot hosting the museum before the Tourism Infrastructure and Enterprise Zone Authority (Tieza) proceeds to title it.

Tieza was formerly the Philippine Tourism Authority (PTA) that was granted authority over parcels of Baguio land by strongman Ferdinand Marcos in proclamations he issued in 1977 and 1981.

Armed with the presidential proclamations, Tieza has asserted its claim over the museum.

According to the board, the Department of Tourism (DOT) plans to develop an P800-million tourism complex on lands hosting the tourism regional office, the Baguio Chamber of Commerce, the Sunshine Park and the museum.

“The ownership of the [museum] has been the bone of contention for every change of leadership of the DOT [Cordillera regional office]. It is time to clarify this issue [by segregating and titling the museum lot to the museum body] and lay it to rest to avoid future misunderstandings,” Nicolas Tabora, board chair, said in the letter to Domogan.

“We believe the museum is part of the cultural heritage and identity of Baguio City…Baguio is unique and should belong to its people and not to the national government,” Tabora said.

The facility was put up as the Baguio-Mountain Province Museum in 1975 but it was heavily damaged by the 1990 Luzon earthquake. It was rebuilt using a P1.2-million fund from the National Commission for Culture and the Arts (NCCA) and was turned over to the board of trustees in 2003 when it was completed.

The NCCA intervention was crucial, Tabora said, because it first required proof of ownership.

Lawyer Teodoro Hernandez, PTA corporate legal counsel at the time, had assured the board “that PTA does not own the lot where the museum stands.”

Reached for comment, Venus Quinto-Tan, DOT Cordillera director, said, “Tieza has jurisdiction over most properties of the tourism complex [where the museum is located], including my office.”

Tieza has asserted ownership based on Presidential Decree No. 1172, which conveyed to PTA “certain parcels of land of the public and private domain of the government in Banaue in Ifugao; Bauko in Mt. Province; and Baguio City.”

This decree referred to the Banaue Hotel, Mt. Data Hotel, and the Baguio City parks.

Tieza also cited Proclamation No. 2144, which transferred to PTA “the administration and control over certain parcels of land of the public domain located in Baguio City for tourism purposes,” and Presidential Decree No. 1762, which gave PTA control over Burnham Park, a popular tourist destination here.

It was not clear why PTA’s control over the Burnham Park reservation was used to stake a claim over the museum. In 2008, then President Gloria Macapagal-Arroyo returned Burnham Park’s management to the city government. —WITH A REPORT FROM KIMBERLIE QUITASOL