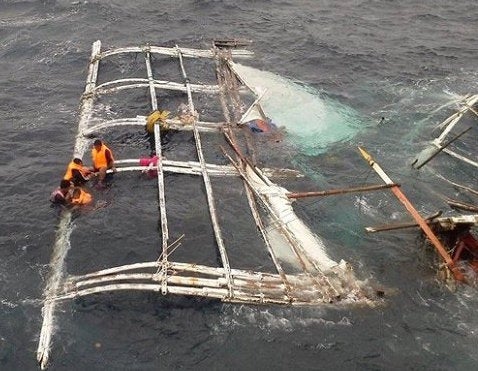 UBAY, Bohol—At least 68 passengers were rescued by personnel of the Philippine Coast Guard (PCG) past 1 p.m. on Sunday, almost two hours after their motor banca (boat) capsized in the waters off the island-village of Butan, President Carlos P. Garcia town in Bohol province.

Although exhausted, no one was hurt among the 61 adults, five children and two infants who were pulled out of the waters, said Rey Enario, commander of the PCG-substation in Ubay town, Bohol.

MB Renel Cruiser left Barangay Looc in Mandaue City around 8:20 a.m., and was expected to arrive at the Pitogo port on the island-municipality of President Carlos P. Garcia past 1 p.m.

The banca was manned by Matronilio Balane, a resident of the island, with his seven crewmen.

The banca was about 30 minutes away from Pitogo port when it hit a floating bamboo in the vicinity of Barangay Butan, causing the banca to capsize, said Benjie Quinisio, PCG-Tagbilaran Station Commander.

The bamboo also punctured a hole in the banca, allowing the water to seep in, he added.

“The banca just capsized after it was hit by a floating bamboo,” he said.

The sea accident was reported by Anecito Zapanta, brother of the operator of MB Renel Cruiser, to the Coast Guard post in the President Carlos P. Garcia town about 1 p.m. on Sunday, which in turn, raised an alert to PCG substation in Ubay town.

A rescue team composed of PCG personnel in Ubay was formed to rescue the passengers.  SFM