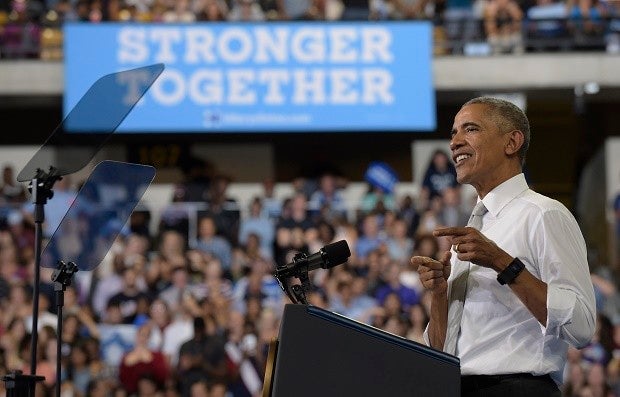 ORLANDO, Florida — President Barack Obama had a warning Friday for Democrats in battleground Florida who may be slightly too confident that Hillary Clinton will win the election: Even if she does, it’s not enough.

As he paid his second visit to Florida in as many weeks, Obama rattled through a list of fellow Democrats he pleaded with voters to support: Rep. Patrick Murphy, the Senate candidate, and House candidates Stephanie Murphy and Charlie Crist, to name a few.

“It’s not enough just to elect her and then have a Republican Congress that is already talking about not being willing to cooperate with her on anything,” Obama told a crowd of 9,000 whose screams reached rock concert volumes. “What we’re going to see is more gridlock and more obstruction and more threats to shut down the government.”

It took eight years, but Democrats have finally gotten the enthusiastic cheerleader for the Democratic Party they say they’ve wanted. Gone is the old Obama, who approached campaigning for other Democrats as a chore. The new Obama is throwing himself into rebuilding his party in his final months in the White House and vowing to keep at it once he’s left.

With his popularity higher than it’s been in years, Obama has been campaigning for Hillary Clinton with gusto, and White House officials said he’ll be traveling to help the Democrat nearly every day until Election Day, Nov. 8. He’ll return to Florida yet again next week, and go to Ohio and North Carolina to boost Clinton.

And in a less-expected development, he’s putting a similar emphasis on the party’s other candidates, cutting nearly two dozen TV and radio ads for House and Senate candidates and holding a similar number of fundraisers.

Obama’s long-term goal: ensuring Democrats don’t get railroaded when congressional maps are redrawn again in 2020 as, they say, they were after the 2010 census. He’s already committing to spend part of his post-presidency developing the National Democratic Redistricting Committee, chaired by his former attorney general, Eric Holder.

So as Obama campaigned for Clinton in Orlando, Democrats were also using the visit to boost Democrats in two Orlando-area state House races and one state Senate race that they see as pivotal toward retaking control of Florida’s legislature by 2020. Like most states, Florida gives the power to redraw its maps to state lawmakers.

“It’s clear these races are going to become much, much more important,” Simas said. “As a reaction to that reality, he’s been very clear with us, not only this year, to expect this is something he’s going to take a personal interest in.”

Obama’s bid to restore balance in redistricting speaks to the biggest obstacle of his presidency, and one he was never able to fully overcome: a Congress occupied largely by politicians from districts that lean so heavily Republican or Democratic that they have little incentive to compromise with the other side.

It wasn’t always this way.

For years, Democrats griped privately that Obama had allowed the party’s political apparatus to fall into disrepair, in part due to his decision after being elected not to fold his own campaign assets into the Democratic National Committee. After all, it was Obama who had brought new voters into the party during his rise to the White House, not the other way around.

While he raised money for Democratic campaign groups ahead of every election, Obama generally took a hands-off approach to the strength of the party itself, current and former Democratic officials said. The party fell heavily into debt in 2012 and it took years to pay off.

Yet if Obama didn’t do as much as some Democrats wanted, it may be because he was never explicitly asked.

“We don’t move on our own to campaign for or to endorse or to do things for specific candidates,” Simas said. “We let the respective committees, and individual candidates to a lesser extent, know that we were open to engaging in campaign activities for them at the right time and in whatever ways they thought were most effective and important.”

In a packed university arena in Orlando, Obama urged his supporters to “vote up and down the ticket” for Democrats, and he took particular aim at Sen. Marco Rubio, R-Fla., who is running for re-election Nov. 8. Obama mocked the Republican for lacking the courage to sufficiently rebuke Donald Trump, and took a few jabs at Trump himself.

“We shouldn’t let our kids think that politics is about pitching a new hotel or a new golf course or a TV contract,” Obama said.